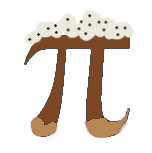 68 thoughts on “Happiness is Pi”