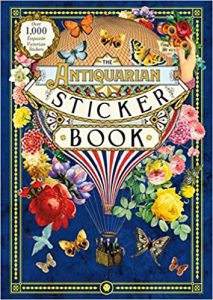 Remember that Lacroix journal I bought? Well, it was too weird to be practical so I bought a Panda journal instead. Then I kept looking at the Lacroix, and at some point it got jumbled together with the Antiquarian Sticker Book, which is the BEST BOOK EVER, and I started doing morning pages, something I have never been able to do, by pulling out one of the weird stickers and pasting it in the Lacroix and free writing about it as a starting point it works. I LOVE THIS STICKER BOOK. I also read a lot of fiction and Ina’s new cookbook but mostly I LOVE THIS STICKER BOOK.

What did you love to read this week? (Or not, maybe you didn’t love it.)