Yes, of course I’m working on a new book.  Several in fact..  None of these is done.  Therefore, none of these is available for presale.  But HUGE potential, just HUGE. 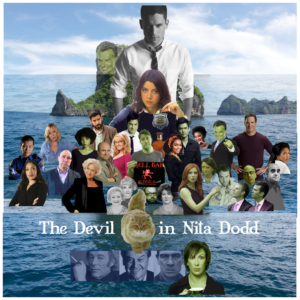 This is one is on its last rewrite. Stay tuned.

Detective Nita Dodd suspects Nick Giordano is a con man when he claims to be (a) the Devil Elect and (b) dead.  But when things she never believed were real start coming out of the woodwork, she’s forced to turn to the Devil she knows.

The Devil in Nita Dodd, Scene One Revisions

Paradise Park is an experiment in episodic novel writing, novella chapters, each a complete story in itself, combined to make a novel.  Not sure yet how many (the ones that are mostly finished are in italics), but the title list is:

Zo White is living a precarious life in New Riven City in the early twentieth century, trying to keep out of trouble the five orphaned children she was put in charge of when they were evicted from the Mothers of Mercy orphanage for being dangerously strange, and she was asked to leave the Mothers of Mercy for not being maternal or merciful. When the Orphants break into a powerful politician’s house, Zo meets Xavier Fenris (call him Ecks), a cop with a heart of steel, which seems to be melting at the edges when he’s around her. Then there’s Ecks’s partner Wyland (call him Wy), who runs into trouble when he investigates a woman named Petal who turns men into frogs when they kiss her. Add in Ylva, the stepmother trying to kill Zo; the secret cult taking out princesses like Pet; Eck’s nephew Harry, a brand new copper who hasn’t learned not to hit the bad guys yet; a house haunted by steampunk beasts who are NOT HAPPY; and the Orphants being the Orphants—Doc, Roseret, Owl, Gleep, and Kitsa—and you have Paradise Park, two love stories with magic, murder, and mechanical bats.

The novel that follows Paradise Park. (Collage below is work in progress)

Six years have passed since the events of Paradise Park, and Zo and the others are still living in the bad part of New Riven City, but Cat Gilchrist lives on Monday Street, the bad part of the bad part of New Riven City, surrounded by murderers and thieves (she’s the second-best pickpocket in New Riven). She runs the restaurant, Maggie’s Ear, for her foster mother as she tries to save the various and sundry people who are part of her life. That does not include Harry, the local crime boss’s newest thug, even though he’s kind of attractive if you like them big and murderous, which Cat does not, and besides she has her own problems because some idiot is digging up the crypt in the abandoned church where she’s living and the magic that was trapped down there is rising, and now she has to deal with air fish and her pet raven, Edwin, talking to her. Add in the newest waitress at the Ear, the slightly surly, definitely magic Keely; and the head of the Department of Extraordinary Complaints, the slight sinister, definitely suspicious Rafe, and Cat has her hands full. Then something besides magic begins to rise in the church . . .

Anna Jone’s life is not going the way she wants: her significant other cheated on her, her new boss is a dweeb, and the guy she had a one-night stand with, the one she called Charlie, turns out to be an FBI agent named Nathan who has suspicions about her and art fraud.  Nate Milner’s not having that great a life, either: Lucy, his sweet little one-night stand, turns out to be Anna, the last of a notorious Mafia family, the daughter of a whack job mama bear, and a prime suspect in art fraud and yet still tremendously appealing somehow.  Arresting even.  Then to make matters worse, his partner (that would be Carter Archer) is called back to Ohio, and Nate and Anna are left alone to face down somebody who really would rather Anna stopped breathing.  Not too crazy about Nate, either.

Alice Archer (from Maybe This Time) is now a thirty-something, lepidopterist by day and a reluctant ghost expert at night, at least the night the book opens when her attempts to dissuade a credulous client into holding a séance with her old friend, Isolde, are hampered by a guy named Ethan who stops by to protect the old lady from the probably-crooked mediums at the behest of his best friend (her name’s Nadine). If that’s not enough, a parapsychologist wants to buy Archer House, Alice’s ancestral home, which Alice is against because ye gods that house is evil, but everybody else is for. Alice goes back to Archer House to find out what’s going on, hampered once more by Ethan at the request of her brother, Carter, and finds it’s not as deserted as she thought it was. As the house fills up again with nefarious parapsychologists, lunatic ghost hunters, her brother Carter and the flaky gallery chick he’s falling for (name’s Nadine Goodnight), most of Alice’s family, and the ever-present Ethan, trouble ensues. Also, ghosts.

Nadine Goodnight (from Faking It) is now a thirty-something gallery manager, running the Goodnight Gallery by day and painting furniture and canvases by night. When a stranger named Carter shows up at the Gallery, Nadine is suspicious. Good call, Nadine: Carter Archer investigates art fraud for the FBI, and the Goodnight Gallery has been flagged by some senator’s wife named Clea. Nadine knows something’s up and the family will lose everything unless she does some fast thinking, possibly accompanied by faster theft. Unfortunately, her best friend and partner-in-crime, Ethan, is off on some wild ghost chase with some woman who thinks she can talk to the dead (that would be Alice Archer), so Nadine’s going to have juggle forgeries, her family (remember them?) and Carter if she’s going to save the day. (OF COURSE, she’s going to save the day).

This is a novella series that follows “Hot Toy,” a Christmas novella I wrote several years ago.  I started “Cold Hearts” because I really loved the heroine’s sister, Courtney, from “Hot Toy,” and then I gave Courtney this great assistant, Darcy, in “Cold Hearts,” and . . . three novellas, one done.  I’m on it. 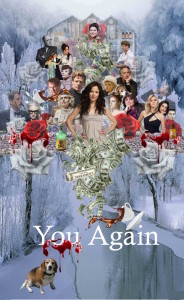 An homage to Golden Age mysteries, You Again is the story of how Zelda Banks gets bamboozled into spending Christmas week in a snowbound house full of ruthless people jockeying for money, power, sex, and chocolate covered cherries.  The population includes Scylla, Zelda’s reality-challenged foster sister;  Rose, Zelda’s manipulative godmother who’s up to no good; James, the boy she had a crush on seventeen years ago; and James’ extended family, most of them fairly horrible people.  Rose has invited a medium named Isolde to hold a seance because what this family needs is someone digging up their past, and she’s brought a teenager named Alice who can talk to the dead, which comes in handy as the family starts dropping like flies.  Food, sex, death, dogs, ghosts, and Christmas carols, Zelda has it all and wants none of it.  Well, Scylla can stay.  And the dog.  And James.  James has improved a lot. And the chocolate-covered cherries, but that’s it. 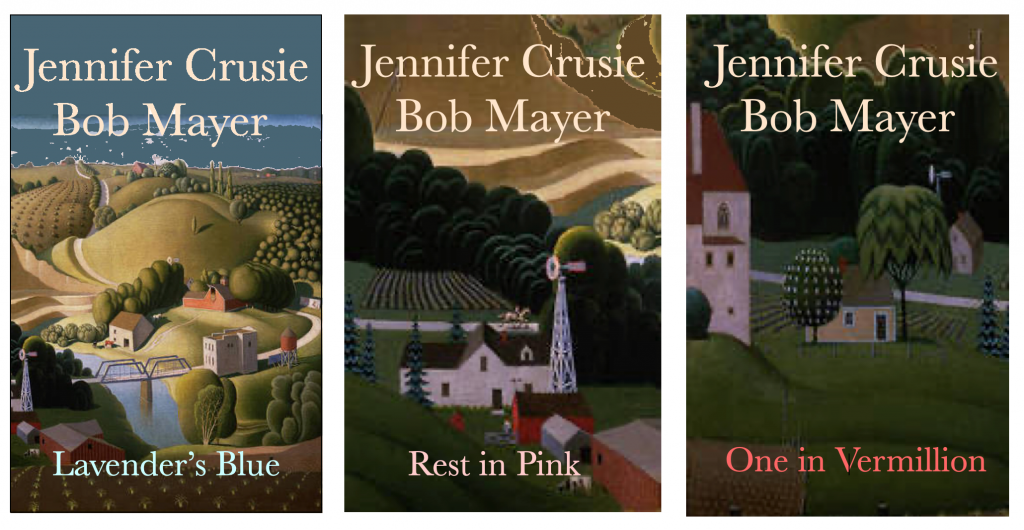 Note: Covers above are mock-ups, not actual covers.  The books just seem more real with covers, even fake ones.

Liz Danger ran away from her hometown of Birney at eighteen and never went back.  Now thirty-three, she’s a ghostwriter trying to get to Chicago to finish the autobiography of her current client, the five-times-married-to-famous-men Anemone Patterson.  But on the way she gets stranded in Birney and has to face all the things she ran away from.  Trouble ensues.