Authors are cover-crazed because we know the dirty little secret of publishing: The reason most people pick up a book and buy it is the cover. After awhile, you may build enough of a name that people will pick up your book no matter what, but even then, a bad cover may make readers think twice. So why do so many books have bad covers?

Lots of reasons, none of them deliberate. Most, I think, are because of a disconnect between the art department which is looking for something that’s visually appealing, the marketing department which is looking for something that sells the book in the short term, and the author who is looking for something that represents her book and will sell her entire body of work in the long run. If they all work together and listen to each other, the chances of a good cover are vastly improved. But most of the time, an author sees the cover when it’s done. And sometimes authors don’t see the covers until the books are in stores. Of course, there’s a reason art departments often do not talk to authors: we’re preoccupied with the book itself and don’t know anything about what sells, so a lot of the times our suggestions are disastrous.

Its with that in mind that I sat down to figure out what made a good cover. (Well, that and I had to do a presentation on it in Reno.) Which is how I arrived at the Crusie Theory of Cover Design which states that a good cover has to do three things:

It must catch the eye across a bookstore.
It must be pick-up-able when the reader gets close.
It must capture the mood and the content of the story.

MUST CATCH THE EYE

Have you been into a bookstore recently? Lotta books in there. If you’re shelved spine out, go somewhere and weep quietly because you’re done. But if your book is on the shelf faced out, the cover showing, is it doing its job of drawing the customer’s eye to the point where she’ll go over and look at it? Publishers know all about this, hence the flagrant use of foil and bold colors, particularly on paperbacks which really have to fight to get a look. But it’s true on hardcovers and trade paperbacks, too. So how do they do it beyond the foil? They use a strong color, hoping that no other art director has picked the same strong color. They go for strong value contrasts, dark on light or light on dark. They use a startling image or a clear distinctive type face. Anything that will catch the reader’s eye so that she subconsciously thinks, “Ooooh, look at that” and crosses the store to see it better.

Then once the reader crosses to see the book, there must be something on the cover that makes her want to pick it up, something beautiful, fun, startling, quirky, SOMETHING. Designers can do that two ways. One is touchability, something about the book that makes them want to touch it, a textured or matte surface, raised lettering, smooth foil, anything that draws fingers to the book. The other is detail, something that makes them want to look closer. If the first requirement of the graphic is that it hook the reader, the second is that it tells a detailed enough story that the reader needs to physically look closer and PICK IT UP.

MUST REPRESENT THE STORY

Once she’s picked it up, she’s likely to read the jacket copy, look inside, etc. and more likely to buy, which is why marketing stops here. She bought the book, didn’t she? What else matters? Reader satisfaction. While marketing wants to sell THIS book, I want to sell the next book, too, I want my reader to like this book so much she can’t wait for my next one. But if marketing has suckered her into buying a book she doesn’t like, I’m going to get bad buzz because she’s going to complain about that. So for an author, it really is important that the cover captures the story, sets the mood, fits the author’s voice, and hints at the story content. The cover should look like the story in the book.

Romance novels get particularly bad covers because of the disconnect between marketing (sell the book) and the author (get the right reader to this book). For awhile there, publishers were slapping busty heroines and hunky heroes on the cover of every historical romance out there, the infamous nursing mother covers, even if the romances weren’t erotic. It’s gotten a little better, although the tendency now is to slap a cartoon cover on every contemporary romance which is equally bad—I don’t do wacky cartoon cover chick lit, but I had one publisher that slapped them on my reissues anyway, putting a hot blonde in a tight red dress kicking over a wine glass on a story about a shy physics teacher whose hair turned green. You want stories about hot twenty-somethings in the city, don’t read Jenny Crusie, but the cover said, “Get your red-hot chick-lit right here.” Argh. Covers like this are so common in publishing they’ve even led to a folk song for authors, The Bad Cover Song, sung to the tune of “They’ll Be Coming Round the Mountain When They Come”:

More recently, one of my reissues got a beautiful, beautiful cover in pale green with a charm bracelet and a puppy on it. The green was a clear mint color so the design drew people across the store; the cover was matte and extremely touchable and the details were beautiful so I’m sure people picked up the book. 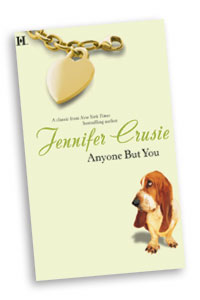 But in defense of this publisher and this design, they’re using the same concept for another of my re-issues and this time they nailed it. 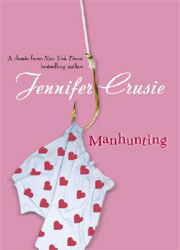 Hot pink cover with a giant fishhook and boxer shorts; that’ll get ’em across the store. Then the fish hook is beautifully rendered, great detail, and the boxers have red hearts on them,and I’m assuming I get that gorgeous matte finish again. Plus a lot of the book takes place in a rowboat with hero and heroine fishing, so the metaphor on the cover is exactly right, great quirky/funny mood, fits my voice, and nails (hooks?) the story. I love it.

Except the woman on the cover was wearing a prom dress and climbing out of a dumpster, and Welcome to Temptation takes place in a small town in Ohio, and the heroine wears khaki shorts for most of it. The French cover was dramatic and noir and sophisticated; the book is snarky and bright and definitely down home. Another great cover on the wrong book.

But when it works right, it’s magic. Anne Twomey at St. Martin’s Press put the perfect cover on Bet Me: bright blue sky with bouncy clouds and glass slippers floating down with cherries. 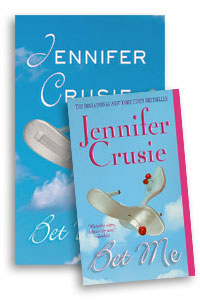 Once people went closer to see it, the cover was matte but the slippers and cherries were glossy, you had to pick it up to feel the textures and see the details. And the story? A modern Cinderella story that was cheerful and light. It was a perfect cover in every way. And then Anne interpreted the paperback the same way, jazzing it up a little with pink foil (paperbacks have to pop harder because the field is so much greater) and it was just as good as the hardcover.

Another great cover is on Barbara Samuel’s latest,Madame Mirabou’s School of Love (in stores March 28). 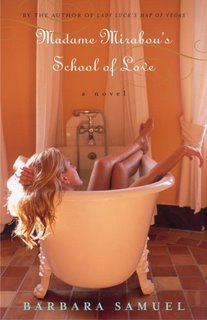 The colors are warm and inviting, and there’s a naked woman on it; people will cross the store to see it. Then I’m betting this is another lush matte cover, but even if it isn’t, people will still pick it up to see the details of that bathroom, the tile, the woman in the tub. The picture is a story in itself the way the Bet Me cover is a story, it makes you want to open the book to find out more. And I haven’t read the book, but I know Barbara’s work, and it’s warm and earthy and lush and always about strong, sexual women. This cover nails all of that. I get chills when I look at this cover, it is just that good.

And then sometimes a cover you’re not thrilled with turns out to be genius after all. We went through at least a dozen different designs for Don’t Look Down and ended up with a really attractive cover that screamed chick lit to me, and Don’t Look Down is not chick lit. 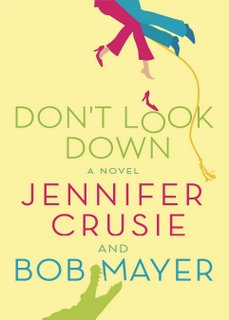 But it was beautiful and the everybody else liked it so we went with it. Then later I was talking to Bob about it, worried that it didn’t really represent his side of the book, and he said, “Well, we could make the cover of the book itself camoflauge. The way Wilder is undercover in the book.” So we asked our goddess of an editor, and she got it done and now a cover I was afraid didn’t represent the book actually had gotten us to a design that represents it better than a single cover that nailed it would have. Not to mention it’s a marketing hook. We’re VERY happy and St. Martin’s comes through like a champ again. 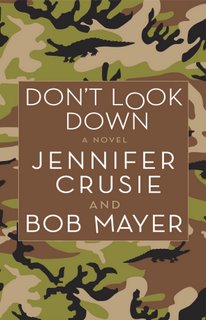 So if you’re an author, what can you do about it? Start by keeping all three of the rules in mind. It’s not as important to exactly illustrate your book as it is to get people across the store to pick it up, so be prepared to give in on some details. You’re going for the feeling of the book, not an illustration of it. Tell your editor your thoughts on the cover, send pictures that seem to evoke the same feelings, give the art department important symbols or images from the book, like the shoes in Bet Me. Try to steer the process in the direction you want it to go before the design starts. Then if they show you the cover as part of the design process (i.e. before it’s finished), have concrete reasons why you want the changes you do, and give alternate suggestions. Don’t say, “I think a dark green cover is wrong,” say, “I think the dark green is too intense for this book. A light green or a light blue might fit the happy-go-lucky style of the story better.” If you can’t explain why something isn’t right and give suggestions on how to fix it, you’re just going to be annoying.

However, most authors are never going to get any input into their covers at all, which is why if you’re a reader, you shouldn’t blame the author for a cover gone bad. Best defense against the cover gremlins if you’re a reader? Open the book and read the first page and then something from the middle at random. You really can’t judge a book by its cover. I can’t believe I ended this with a cliche but hey, like most cliches, it’s true. And still readers buy books by their covers.

And that’s Crusie’s Theory of Cover Design. Lecture over. Until next time.