We’re still working on Rest in Pink. That’s going to be pretty much every Working Wednesday post from now until the end of July. We’re at 60,000 words, so we are working.

What are you working on?

(Here’s another glimpse into the fascinating world of professional collaborative writing:)

END_OF_DOCUMENT_TOKEN_TO_BE_REPLACED

We’re at 60,000 words now. Dealing with the nitty gritty. Like road names: 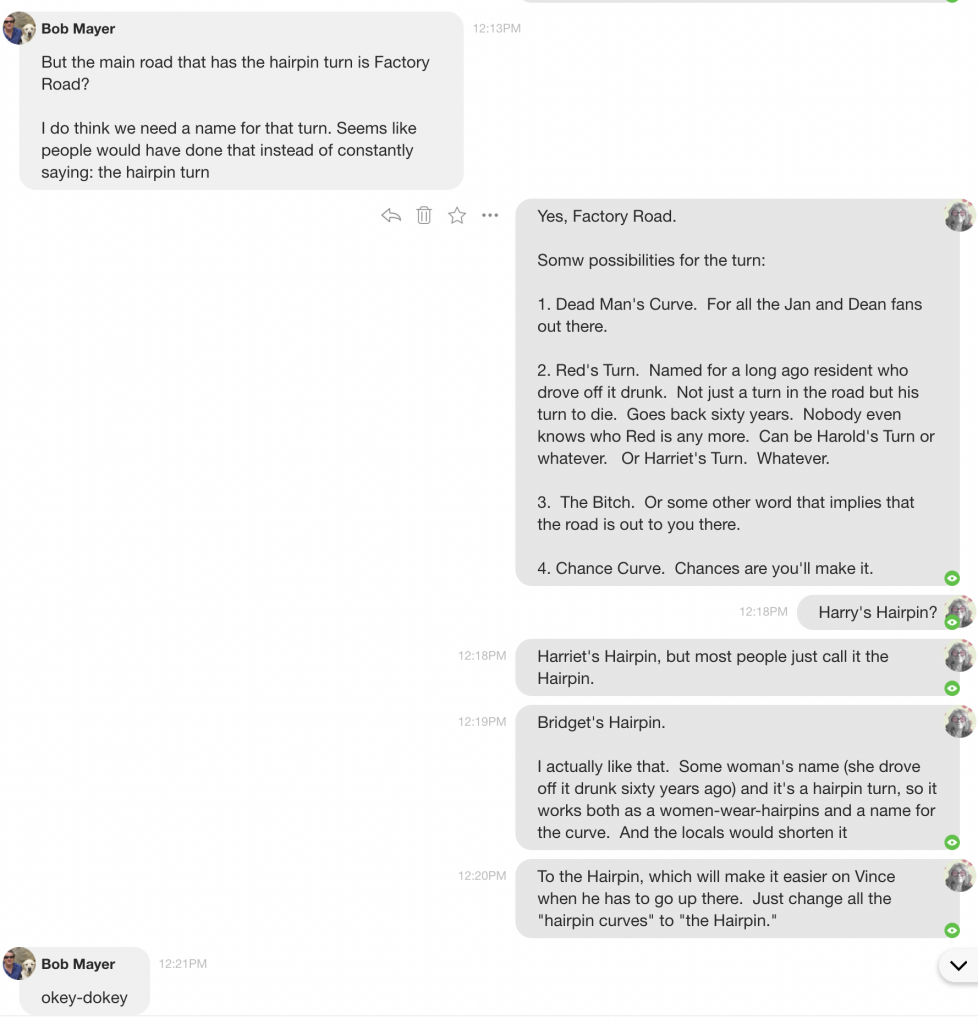 And then much later:

Those of you who’ve been around for awhile are familiar with Jane and Richard from my writing lesson examples. I believe at the moment, Richard is buried somewhere in Jane’s boss’s backyard while she enjoys her promotion. Anyway, Anemone and Liz are writing a romance novel in Rest in Pink, which has led to many meta moments like this one:

Anemone picked up the folder she’d brought to the breakfast table. It was pink, so I already had an idea of what was in it. “She’s a thirty-three-year-old writer—”

“—of romance novels. Why not?”

“Write what you know, Liz.”

“Also writers lead very boring lives, sitting around in t-shirts and pajama pants, drinking Diet Coke and googling for minutiae. You can’t get a story out of that.”

But then Bob, who has no respect for my creative process, pointed out that Richard and Jane were actually Dick and Jane. So I had Liz tell Anemone that, and then they googled for Dick and Jane so they could steal the plots–yes, by then I was way past the book we were writing–and, well, here’s Liz and Anemone talking about the book they’re going to write about Jane and Richard. I’m pretty sure none of this except for the first one will appear in Rest in Pink, but you never know. Also every story cited below is real, including the one with Dora.

END_OF_DOCUMENT_TOKEN_TO_BE_REPLACED

I’ve been making myself crazy between the book and the house and a thousand everyday things, and then Bob started talking about ring tones, and then after he quit for the night (he’s a day writer which I don’t get, must be a military thing), I started just searching for music in general and ended up with Cyndi Lauper singing “I Drove All Night,” and Rihanna doing “Umbrella” (yes, of course I watched the Tom Holland lip sync again) and Kelly Clarkson ripping her boy friend a new one along with his leather seats and tires with “Before He Cheats,” and Walk the Moon’s “Shut Up and Dance” and Sugarland doing “Come On, Eileen” with Sara Bareilles . . . well, there was more, and that’s when I remembered that playing music has kept me sane and happy all my life, something I forget when I get too far up in my own head. So I owe Bob for that one, too.

I told him Liz’s ringtone for Vince at the end of Lavender’s Blue is “Break on Me” which Bob doesn’t like because he says it’s boring. He’s wrong, it’s wonderful and sensitive and . . . but I am a cooperative collaborator so now Vince’s ringtone is “I’m Still A Guy.”

So I got my part of Act One done on Rest In Pink, and now I’m looking back at Lavender. In particular at the Act One there which is sloooooooooow. The first act of Pink is 35,321, which is also too long, but this is rough draft, so close enough for now. The finished Lavender Act One? 38,579. Attention must be paid.

A quick look down the scene list with the scene word counts pretty much shows me that Bob is not the problem. Bob’s writing is compact, almost terse. No, I’m the problem. Five thousand words out of my stuff, not his.

So the first thing to do is update the scene list with word counts of the scenes. That’ll show me where I lost my grip. And sure enough there are four scenes where I went over 2500 words. That’s not a magic number for scenes, but for me that’s where readers get tied of reading.

But it’s not just word count. Bob is doing the heavy lifting on the mystery so I’m doing the romance. And to make that work, I need Liz and Vince together as often as possible. And there are six scenes in Act One where they’re together, sometimes only in passing. Three scenes when they’re together for the whole time and focused on each other. How many scenes are there in Act One? Twenty-two. Three scenes out of twenty-two to sell my romance. No.

But there’s also the story to consider. There are a lot of subplots here and Liz’s romance plot interacts with Vince’s mystery plot; I can’t just jettison everything but Liz and Vince (tempting, but no).

So to figure out how to fix this, I need to condense what I’ve written down into sections/scene sequences.

So Scene Sequences for Lavender’s Blue, Act One. It reads like a synopsis but there are no spoilers beyond the first act.

END_OF_DOCUMENT_TOKEN_TO_BE_REPLACED

My power cord betrayed me again and I have been unable to log on until now.

In that time you have posted 250 comments. Do you even need me here? Yes, to put up posts. Here, have another one.

In other news, Bob and I have reached 48000 words on Rest in Pink, which I just gave back to him, even though he turns into a pumpkin about eight which is further exacerbated by muscle relaxants because he hurt his back. That’s what he gets for doing things other than writing.

I am now going to read comments and cut the hell out of the beginning of Lavender’s Blue because Rest in Pink starts fast and is very good. You all talk amongst yourselves in the comments (like you need me to tell you that).

Oh, and here’s the beginning of Rest in Pink. I know you haven’t read Lavender’s Blue yet, but Pink is supposed to stand alone. The X’s are the parts where I took out spoilers. I do not count the fact that Vince and Liz are lovers as a spoiler. You all knew that was coming after you read the first scene in Lavender.

END_OF_DOCUMENT_TOKEN_TO_BE_REPLACED

This week, I read Lavender’s Blue for the zillionth time, and Rest in Pink, what we have of it, about 40,000 words now, for probably the tenth time. I also read a lot of samples on Amazon Kindle, but nope, my head’s in the book we’re writing, which means I have no new books to tell you about. I’m selfish like that.

So over to you. What did you read this week?

I cleaned house (I’m going to be cleaning this house to the end of time). I did laundry. I did dishes. And I wrote more of Rest in Pink (now at 35,000 words) with Bob, which is really different for me because the first book, Lavender’s Blue, was the meet, mate, and merge book, where they’re happily together without commitment at the end. So this book is how they work their way to commitment, cautiously, porcupine love, very cautiously. It’s a different romance arc for me, and I’m having so much fun with it.

What did you do this week that was fun? Or not.

(Also, where the hell did June go?)

Krissie wrote and said, “I’m worried about disrupting your writing because it’s going so well,” and I looked at how much time I was actually spending writing and talking with Bob online, and she was right. So she’s putting off her visit because she is a goddess of a friend and we’re speeding right into Act Two. And the weather here is wonderful–okay 90 here for the next two days and it’s June so what the hell? but then 70s again the rest of the week–and everything is growing like crazy and the house is getting incrementally cleaned out–damn I have a lot of stuff–and there’s nothing but good times ahead even though aliens have evidently taken over the Supreme Court and I hope James Comey is happy, the dimwit.

Right. What made you happy this week?

Bob and I have finished Act One of Rest in Pink, which is pretty damn good since we started it about two weeks ago. We have had a few kerfluffles–he insists on only one space after a sentence and I don’t care if it does make me an old fogey, you need two spaces for clarity; I am trying to teach him that plurals do not take apostrophes; it gets heated at times–but we’re pretty much in sync at this point, although we do spend a lot of time arguing about what fictional people would do. In our last debacle, I did a sex scene and sent it to him last thing at night, and then stayed awake most of the night because it was the wrong scene in the wrong place at the wrong time. I e-mailed him the next morning and said, “DON’T READ THAT,” but it was too late and while he had some questions–JUST DELETE IT, BOB–he thought we should keep it. That took up a chunk of the morning.

But the point is, we’re at 34,000 words, so we’re both feeling pretty smug about the whole thing.

And now back to you. When we were talking about the blog awhile ago, some of you said you’d like an open post to talk about anything you wanted and to ask each other questions. That was confusing to me because it’s not like we make you stay on topic here and the comments generally range pretty wide, but evidently some of you felt constrained, so here you go. No constraints. Go where you will in the Comments, Argh People. It’s all yours.