I’ve been working on Nita and the thing is, I really love this book. It’s flawed, it needs help, but I did good work in this book. And Bob and I did good work in the Liz-and-Vince books. This isn’t the go-out-and-brag kind of public congratulations that’s all about selling things. This is quietly looking at what I’ve done and knowing that even if nobody else ever sees this, I’ve worked hard and made something good, a private but very satisfying happiness: This is what I do and I’m good at it. Self-confidence porn. Since usually I’m very self-critical, this is extremely happy-making.

How were you good and happy this week?

I started Nita in 2016 (I think) and there’s a page in the Works in Progress menu here that shows six revisions of the first scene, one for each year from 2016 to 2021. (Don’t read all six. If you’re curious read the first and last one, reading all six will make you hate the book.) So now it’s 2022 and this is the last damn time I’m doing this because it really does get to the point where I’m washing garbage.

So here’s my method for revising scene.

I need to get Nita out the door, so I’m getting serious about it. Well, I was always serious about it, but now I’m REALLY serious about it. It has problems that I have to identify, which means analysis. Argh. So here’s my plan. (Yes, once again, you’re being subjected to me talking about my writing problems. Feel free to skip.)

END_OF_DOCUMENT_TOKEN_TO_BE_REPLACED

I’m reading The Devil in Nita Dodd. Over and over and over again. Devils and demons but no zombies. I have some standards.

What met your standards for reading this week?

I’m working on Nita, coping with Bob and his zombie lust, and throwing out half my kitchen.

Frannie and Lexi were best friends. Sisters of the heart. Partners in crime. But when they got caught, only one of them went to prison.

Five years later, ex-con Frannie is back to claim her share of the money they stole, then she’ll disappear and start a new life. 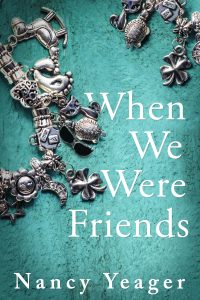 But with her ex-best friend, a lonely kid with a mangy mutt, and even Frannie’s high-school crush pulling on her heartstrings, leaving doesn’t look as easy as it once did. When an old enemy surfaces, though, Frannie realizes her staying endangers everyone she loves. And even though she might have found her heart’s true home, there’s no guarantee she can keep it.

Buy it now on Amazon.

Bob and I are taking a break because we strained our brains writing three books in seven months, but we are starting to talk about the next one.

Reminds me of that time when he said, “Who’s Your Girl this time?” and I said, “A food writer,” and he said, “My Guy’s a hitman.” That worked out okay. Still, I have grave doubts about Rosie and the Guy Walking the Appalachian Trail with His Dog.

But first we take a break. He’s finishing the next Phoebe book and I am going to get Nita out the door for once and for all.

Then I’ll deal with the damn iceberg.

Yes, I’m still rolling in the ecstasy of finished books, but the icing on the e-mail was when Bob wrote “Book done yet?” and I could say, “YES! YES! YES!” It’s the little things, you know?

What little things (or big things made you happy this week?

Note 1: I wrote this awhile ago and never posted it. The excerpts are from One in Vermillion, so it wasn’t that long ago, but it does show a little more about how we collaborate.

Note 2: It was Bob’s birthday yesterday. (I suck at deadlines.) I think finishing three books is present enough, but I did cast an eye over the Lego zombie pirate captain on Amazon. Good thing I don’t know his address or he’d have that sucker on his desk now.

Bob and I have very different voices, which is good, it helps tremendously in differentiating the two PoV characters. But when we have to write each other’s characters, it becomes a problem. That’s okay, we just go in and rewrite our own characters to fit, smooth out the scene to conform to our styles. Bob shortens my run-on sentences in my first drafts of Vince scenes, and I start combining his sentence fragments into complete sentences in Liz’s. That’s not because I think sentence fragments are bad, they’re a feature of his writer’s voice and by extension of Vince’s voice. But they’re not Liz’s voice. In the same way Bob’s voice (and Vince’s) is fairly formal and measured, which I chalk up to years in the military. But my voice (and Liz’s) is very informal, full of slang and rat-a-tat-tat pacing. Again, this is a good thing, putting that difference on the page.

I thought of that last night when Bob gave me two scenes to rewrite in Liz’s PoV. Why was he writing Liz? Because she’d gotten sucked into an action scene with a gun, and I know zilch about that. Much better for Bob to write it and get the details right, and then for me to rewrite it to fix the voice. This is something we’ve been doing for years, so no egos are bruised or broken; I expect him to do the same thing for the Vince scenes I write. We usually end up handing the scenes back forth a couple of times before we’re both satisfied. It’s a good system.

Usually he hands me the scene and it’ll have a note on it that says something like “insert banter here,” and usually my process is go through and take out all his Latinate/formal words and put them into Anglo/Saxon vernacular, with a few stops to change something that sounds more like a guy than a woman. And I hand him a scene and say, “You’re going to have to butch this up,” and watch him start to cut. The important part is, it always makes the scene better.

So here’s a paragraph from the doc he sent me last night, first his version and then my rewrite to put it into Liz’s voice.

Bob’s First Draft:
Vince had roused me from barely enough sleep to be worth going to bed, well before the sun came up. I had to admit it was my own damn fault for pulling the stunt with Molly last night but it had been so worth it. And, as he’d reminded me, a couple of times during the drive, this was the price to be paid.

This morning, though, wasn’t on the same level of being a stunt. This was for real, which hit home when Vince pulled off Route 52 onto a dirt road to a small clearing where George was waiting in his big truck and Rain in her snazzy Mercedes. They both got out when we stopped.

Jenny’s Second Draft
That morning, Vince had woken me up a couple of hours after we’d hit the sheets, long before the sun came up. I rolled down over the foot of the bed, cursing Major Rogers and his perverse lust for dawn. I knew it was my own damn fault for trashing O’Toole’s posters with Molly last night but it had been so worth it. And, as Vince continued to remind me as we drove to meet Rain and George, this was the price to be paid for immature vandalism.

“It was a paintbrush,” I said. “Die by the paintbrush just doesn’t have the same ring.”

He continued to explain why trashing the posters was immature, unproductive and illegal, but I didn’t care. People were going to laugh their asses off when they saw those posters. Also, I was pretty sure he was doing it to distract me from the fact that we were all gonna die.

There was nothing funny about this morning, though, which hit home when Vince pulled off Route 52 onto a dirt road to a small clearing where George was waiting in his big truck and Rain in her snazzy Mercedes. They both got out when we stopped.

You’ll notice my draft was longer. That’s in part because I’m a slut for dialogue, but mostly because of character. That is, if that scene had been from Vince’s PoV, it would have been the length Bob made it because Vince (and Bob) would be thinking about the mission, not bantering with a nervous girlfriend.

But it’s in Liz’s PoV, and she (and I) are thinking about what’s coming up, about how dangerous it is and how out of her depth she is, so she’s babbling, trying to keep things light so she doesn’t start screaming from nerves. Humor: it’s a great deflector of emotion.

So I started the last in the Scholomance series with great anticipation and hit the wall. Spoilers below and probably many more in the comments. You have been warned.
END_OF_DOCUMENT_TOKEN_TO_BE_REPLACED