Our own Brenda Margriet has a new book out: Loving Between the Lines.
A one-night stand neither will forget.

She wanted a final fling before choosing science to make her a single mom. He needed an escape from the regret grinding him into dust. Her baby isn’t his…but maybe family is more than DNA. 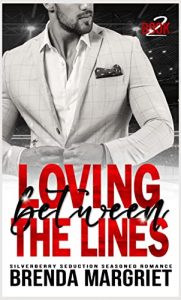 After a childhood being dragged around the continent by her musician parents, Lynn Kolmyn has stretched her roots deep into her chosen hometown. When her absconding fiancé screws up her careful plans, she decides to become a mother at almost forty, realizing the only person she can rely on is herself.

Benjamin Whitestone was the hometown hockey hero until a spectacular mistake led to failure and condemnation. No matter how hard he tries, he can’t seem to make it up to his parents, his teammates, or his fans. In a final bid to prove himself, he accepts a job coaching the junior team where he used to be a star, determined to rewrite history.

When Lynn and Benjamin collide—literally—they are both shocked to see the stranger from a single sensual night two years ago. Now the past tangles with the future…a future neither of them was expecting.

(This is Book Two in the Silverberry Seduction Seasoned Romance Series but can easily be read as a standalone. Book One in the series, SECRETS UNDER THE COVERS, is currently exclusive to the A SEASON FOR LOVE Anthology.

15 thoughts on “Argh Author: Brenda Margriet’s Loving Between the Lines”