This week, I read Lavender’s Blue for the zillionth time, and Rest in Pink, what we have of it, about 40,000 words now, for probably the tenth time. I also read a lot of samples on Amazon Kindle, but nope, my head’s in the book we’re writing, which means I have no new books to tell you about. I’m selfish like that.

So over to you. What did you read this week?

I cleaned house (I’m going to be cleaning this house to the end of time). I did laundry. I did dishes. And I wrote more of Rest in Pink (now at 35,000 words) with Bob, which is really different for me because the first book, Lavender’s Blue, was the meet, mate, and merge book, where they’re happily together without commitment at the end. So this book is how they work their way to commitment, cautiously, porcupine love, very cautiously. It’s a different romance arc for me, and I’m having so much fun with it.

What did you do this week that was fun? Or not.

(Also, where the hell did June go?)

Krissie wrote and said, “I’m worried about disrupting your writing because it’s going so well,” and I looked at how much time I was actually spending writing and talking with Bob online, and she was right. So she’s putting off her visit because she is a goddess of a friend and we’re speeding right into Act Two. And the weather here is wonderful–okay 90 here for the next two days and it’s June so what the hell? but then 70s again the rest of the week–and everything is growing like crazy and the house is getting incrementally cleaned out–damn I have a lot of stuff–and there’s nothing but good times ahead even though aliens have evidently taken over the Supreme Court and I hope James Comey is happy, the dimwit.

Right. What made you happy this week?

Bob and I have finished Act One of Rest in Pink, which is pretty damn good since we started it about two weeks ago. We have had a few kerfluffles–he insists on only one space after a sentence and I don’t care if it does make me an old fogey, you need two spaces for clarity; I am trying to teach him that plurals do not take apostrophes; it gets heated at times–but we’re pretty much in sync at this point, although we do spend a lot of time arguing about what fictional people would do. In our last debacle, I did a sex scene and sent it to him last thing at night, and then stayed awake most of the night because it was the wrong scene in the wrong place at the wrong time. I e-mailed him the next morning and said, “DON’T READ THAT,” but it was too late and while he had some questions–JUST DELETE IT, BOB–he thought we should keep it. That took up a chunk of the morning.

But the point is, we’re at 34,000 words, so we’re both feeling pretty smug about the whole thing.

And now back to you. When we were talking about the blog awhile ago, some of you said you’d like an open post to talk about anything you wanted and to ask each other questions. That was confusing to me because it’s not like we make you stay on topic here and the comments generally range pretty wide, but evidently some of you felt constrained, so here you go. No constraints. Go where you will in the Comments, Argh People. It’s all yours.

I am currently reading Rest in Pink.

Yes, I know my GBT posts have been all Lavender’s Blue and now Rest in Pink, but we are working on this now obsessively and it’s all I’m reading. Thank god there are other people in here who do not have reading tunnel vision.

I have a guest coming on Saturday, so I’m cleaning. I’m also writing a novel that is moving at breakneck speed which is lovely but a little daunting. But still, working here.

So there’s a biker gang in the Liz trilogy that needs a name. Bob suggested “Bad Crusies.” I suggested we ask you for suggestions. So this is a Rust Belt biker gang, headed by a sociopath and being used by bad guys to threaten local businesses. So not a good biker gang, not like Jill’s biker gang.

Suggestions in comments, please. Bob will probably choose the name since this is part of his plot. (You sort of knew it was his plot already, didn’t you? Not much snappy patter in vicious biker gangs.)

On Monday, Bob and I started Rest in Pink.

I’d done 65,000 words on Lavender’s Blue when he joined in, and the draft we have now of Lavender is just under 120,000 with only some of those from the original 65,000. He coped with joining a book in progress and I’m grateful. But now we’re starting from scratch, although with the same characters and setting, and it’s a blast.

In one week we have 20,000 words of rough draft and a million plot ideas.

Starting new things makes me happy. (See my many WiP crochet projects for evidence.). Finishing makes me even happier.

Susan B. James (aka Susan Berger), posted this yesterday in the comments:
“My rom com Irish Magic is .99 tomorrow thru Sunday.

The audiobooks for all three of my Susan B James books are on sale at Chirp, Google Books and Barnes and Noble are on sale thru June 30.” 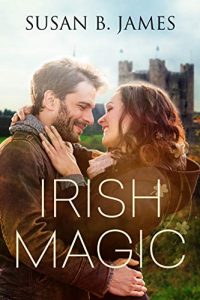 A romantic comedy with a touch of magic.

What do you do when everything goes wrong?
Make a wish on a four-leaf clover, right?
There’s no other logical way out of it!

But a clover wish is a heart wish. Everyone knows that. END_OF_DOCUMENT_TOKEN_TO_BE_REPLACED

This week I read Slouch Witch and its two sequels once. And the instructions for a cat tower WHICH WERE NOT HELPFUL several times. And Bob’s revisions on Lavender’s Blue for the millionth time. We really have to move on now, I’m starting to have parts of this memorized.

What did you read at least once this week?