Bob: “Don’t Try This At Home, Part Deux,” July 12, 2002
Really. Don’t. We got into it this morning. Profanity. Every dirty thing from the past we could think of. Back and forth. More profanity on Jenny’s part. Of course we’re getting more mature and it was over faster. And all because I wanted Xavier to think about that alligator that Crockett and Tubbs used to have on their boat in Miami Vice and then have Hammond go over to Joey the Gent’s truck and check the hood to see if it was warm. You’d think it was no big deal. But it started the Great Agnes and the Hitman war.

Oh yeah and I put back in Joey the Gent’s Italian flag license plate. And some other stuff. Minor stuff. Really. We got into Four Acts versus the Five Part Narrative Structure debate. Whether Tyler should have been in DLD. Cats versus Dogs. What kind of dogs. What’s wrong with left-handed people. (I’m left-handed). The burning river in Ohio. Why I’m always right. The problem with small towns in Ohio. The problem with big town in New York. Lineages going back several generations. Yada, yada, yada. I solve it by saying, “Well, gotta go cause I have to check out of this motel (I’m on the road) and won’t be back on line until around 7 this evening. Yep, you’re right about everything.” I could just see the blood vessel in Jenny’s forehead pulsing as she pounded her keyboard.

I’m sitting in the parking lot of the Boulder, CO library writing this. Of course, this is the one day of the year I’m here, and it’s the one day of the year the library is having staff training until 2 PM. And it’s 1145. I have the world’s greatest timing. Really. Usually it opens at 10. It’s a really pretty library. It would look a LOT better from the inside since it’s like 95 degrees outside and the sun is really hot here at a mile high. But am I complaining? Nope. Because I am a peaceful soul, and there is a squirrel nearby I am communing with. We are at one. A little later I need to go check out angles of fire for CHASING THE DEAD for sniper shots.

Jenny: “If You Must Know,” July 13, 2002
He was telling the God’s honest truth about the fight until he got to the cats and dogs part and the left-handed stuff and then he was just on a roll, making stuff up. He can have all the stuff he put back in including Crockett and Tubbs, just not where he put it, and we’d discussed it once and agreed, and then he put back FOUR PAGES of it and killed the opening, and while I was pointing that out like an adult, okay, not like an adult, but I apologized in the next e-mail, he said, “Well, you took that well, let’s keep this professional,” and then all I remember is a red haze blotting out the sun, and he yelled, too, and when it cleared . . .

We have to stop doing that. It’s not like it’s fun. And when it’s over, we look at each other and say, “Why do we DO that?” The profanity isn’t the problem, he’s from the Bronx and I used to teach junior high, we’ve heard it all, it’s the wasted energy. And then we go, “Right. So in this next scene . . .”

And the book is really good, too. It’s not the book that’s making us crazy, it’s each other. (You know, I really only have one Hot Button, and he hits it EVERY DAMN TIME, and I don’t think that’s an accident, do you? I mean if you knew your partner was guaranteed to go absolutely berserk if you did something, WOULDN’T YOU REFRAIN FROM DOING THAT, but noooooo . . .where was I?)

The only good thing about this one is that usually it takes us until midnight to quit fighting and say, “Okay, fine, now in this next scene,” but this one was over by noon. Mostly because we were both so appalled by ourselves. Well, I was appalled. Bob just wanted to get the book done so he stopped fighting, it’s not like he agreed I was right. Sigh. But it wasn’t about being left-handed. My mother is left-handed. Jeez.

“. . . a series of reversals. Where the hero always gets slammed. Has to pick himself, get going, and gets slammed again and go in a different direction. Never that there damn romantic plot to worry about. That complicates things. See THAT’S why you kill the love interest off. Simplifies things. So if we have the second hitman kill Agnes then what we got is a revenge book which are really cool and simple to write.”

Discussion then ensued. And continues. Back later.

Bob: “Discussion Ensued” July 16, 2006
“. . . a series of reversals. Where the hero always gets slammed. Has to pick himself, get going, and gets slammed again and go in a different direction. Never that there damn romantic plot to worry about. That complicates things. See THAT’S why you kill the love interest off. Simplifies things. So if we have the second hitman kill Agnes then what we got is a revenge book which are really cool and simple to write.”

Such as: And then Shane runs into Agnes’ demure younger sister, little Abigal. Sister Abigial. Who is a nun. Albeit, a nun who packs a rocket launcher. No pun intended there. Trained in three martial arts by ninja Jesuit Priests. Immune to pain because of the floggings received in her teenage years– well, we won’t go there either. She did exchange training with the dark side so she’s also familiar with various spells that will come handy at JUST the right time. Such as when Shane needs them.

Also, poor Abigal is having doubts about her vows of chastity. So is Shane. Doubts about her vows. He has long, soulful discussions with her about them in between gun battles while reloading. He really doesn’t think they’re good for the mission. Because that’s what it’s all about: revenging Agnes, damn it. And anything that’s good for the mission, well. That’s, uh, important. That’s pretty much the extent of the depth of his argument.

So that’s where things are. Shane and Sister Abigal on the trail of the albino religious killer– wait, that’s been done. And we certainly wouldn’t want to PLAGIARIZE someone else’s book. That would be like, wrong, wouldn’t it? That’s like where you take something someone already wrote and you like write it and then say you thought of it. I think. Damn this writing something original is some hard stuff. OK, no albino religious killer. We’ll make him a, um, recovering junkie who pulls hisown wisdom teeth out during recovery killer. Now that would be one bad-ass dude. He probably has like tattoos and stuff and would appear on Oprah. And he’d have the secret ability to break into a million little pieces and then reassemble himself when needed. That would be so cool. Wait, damn, that’s been done too. All right. We’ll call the killer A Child Called It. Cool. I like that. Shane and Sister Abigal vs It. I used to love watching Godzilla vs Mothra and movies like that. Where was I? Damn. It has been done too. All the cool stuff’s been done.

We’ll have to ensue more discussion.

Jenny: July 16, 2006
Agnes was reading over my shoulder when I brought up the last blog post.

She leaned closer to the screen. “Who’s this Abigail? A nun? I don’t even HAVE a younger sister. Didn’t he read the back story?”

“Yeah, but he forgets. He’s just playing around.”

“Shane’s having doubts about her vows?? THE PERV!”

She straightened. “I’m not having sex with that perv.”

“Even Troy never hit on an underage nun.”

“Nope. Not doing it. Shane never brought me the snuggle couch, either. Or the TV. Just stomped around in the swamp with my dog and whined about that bimbo in the pink T-shirt.”

Agnes thought about it. “What do we know about him?”

“Not much. Seems cheerful. Handy around the house. Gets rid of dead bodies.”

Agnes nodded. “I can work with that. Get rid of the perv.”

Bob: No Trouble Here, Folks, July 16, 2006
All right, show’s over. Keep moving folks. Nothing to see here. It was just an accident. A little fender bender. Stop gawking. Move on through. Hey you, yeah you. What are you? A sicko? Nothing to see. Just a little blood and guts. Get moving. Let’s go. Let’s go. Keep it moving. Places to go and people to see. Go this way or thataway. I don’t really care.

“Yet knowing how way leads on to way.
I doubt if I should ever come back.
I shall be telling this with a sigh
Somewhere ages and ages hence:
Two roads diverged in a wood, and I-
I took the one less traveled by,
And that has made all the difference.”

So now it’s 2022, not 2006, and we’re much more mature now. I don’t think either one of us has sworn once since we started collaborating again. Well, not at each other. Adulthood. It has finally arrived. 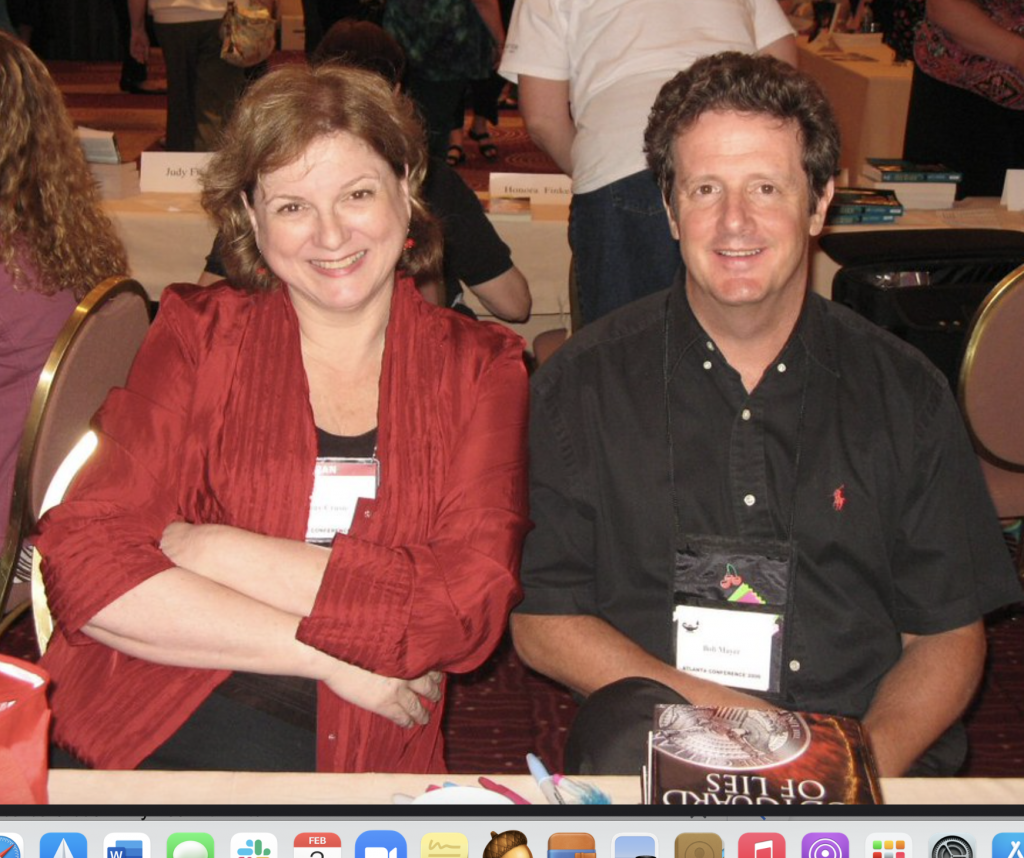 19 thoughts on “Um, I Was Wrong, We Did Fight About the Writing: More Re-Runs from HWSW”