I used to get asked about collaborating all the time, mainly, “How do you do that?” My answer was, “It’s complicated.” It’s still complicated, but since people are going to ask . . .

(1) The first thing I recommend is that each collaborator pick a character and write that. That approach has never failed me in any of my collaborations. It emphasizes the power of voice to make a character come alive and since writers have different voices, it’s a no-brainer for variety in the narrative. It also cuts down on collaborator conflict since you’ve got your own character and subplots to explore. It’s not so much “you stay in your lane and I’ll stay in mine,” as it is “this is your part of the story and this is mine, and we’ll visit each other.” Think of it as writers with benefits, the benefit being that you don’t have to write the whole damn book. Also, it’s really a lot of fun seeing what the other writer comes up with, reading new stuff in a story you’re writing. Writing is a lonely business, collaborating is not.

One of my creative writing profs at OSU (Hi, Michelle!) gave us a writing exercise to take a character from the short story of the student next to us and write a scene with that character and one of our characters. I thought it was odd, but it was the most illuminating exercise I ever did because the character from somebody else’s story pulled my character into situations and settings and conflicts that were completely new to me. I had to stretch, and I found out more about my character doing that than I had by writing the character in my own story. Bob and I just did a good hour’s worth of talking about character change, what it meant, how Liz and Vince echoed each other, acted as foils for each other, how the ten million subplots played out the dynamics, and I realized things about Liz I hadn’t thought about, and I think he saw things in Vince, too. The idea of two writers (or more, I’ve done three) in a narrative each with their own character seems like it would be counter-productive, but if you’re both interested in the story, if you both care about what the story means on the surface and in the subtext and you explore that not only within your characters but without, in the relationships between the characters and how that subtext plays out, you get a narrative that’s really rich, probably richer than you’d get controlling all the characters yourself. Collaboration pushes you out of your ruts, and redesigns the ruts you keep.

(2) The second thing is to work out together plots and subplots that serve your characters, picking one to be the main plot. My plan for this trilogy was three mysteries that taken together would make one huge romance novel. Bob’s character Vince is a cop, so he got the mystery plots, which is just his bottle of beer. My character, Liz, is a ghostwriter who gets roped into writing a romance novel in the second book, and the romance plot is what I’m happiest writing. He likes plot, I like character. Of course Liz is also involved in the mystery plot and of course Vince is part of the romance, he’s the love interest, but this way Bob gets control of the mystery plot (he loves control) and I get my say on the romance, aka the YEC (Yucky Emotional Crap, which he would prefer not to touch with a ten-foot burning zombie).

And then when the first draft is done, you look at all your plots and subplots and talk about the parallels, how they’re showing the character arcs (not telling), how they’re all in one way or another, connected to the same spine that your character arcs created. If they all interlock, your story is tight, which is what rewrites are about. Not creating new content, but pulling all the narrative as close as possible to those Big Ideas. I think one of things that defines a good storyteller is that feeling a reader gets that there’s an authority in the text, that they’re in good hands, they can relax and lean into the story, that it will all make sense in a satisfying ending. (Note, not necessarily a happy ending, but a satisfying ending.). And two people hashing out how the events of the story support the central idea pretty much guarantees a tight, authoritative story.

(3) The third thing is practical: you have to work out a strategy for exchanging chunks of the story. This time was awkward because I had about 65,000 words of the story done when I got stuck and yelled for help. Plus, like all my other mss, it’s old, so there were different versions. So I dumped the whole thing in Bob’s lap and said, “You do Vince, we can change whatever you want” (I was desperate) and all of a sudden my dead story was alive (not a zombie reference).

So we started off with the first two acts (which are now over 70,000 words again, so we’ll be cutting that later), but swapping huge files is a lousy way to write, so with Act 3, we went to labeling scenes. I did a scene list chart, always tentative but a starting place. I wrote in all the Liz scenes I knew about, leaving room for Bob’s stuff. It’s easy to edit a table, so we can keep a fluid list with notes, passing it back and forth. 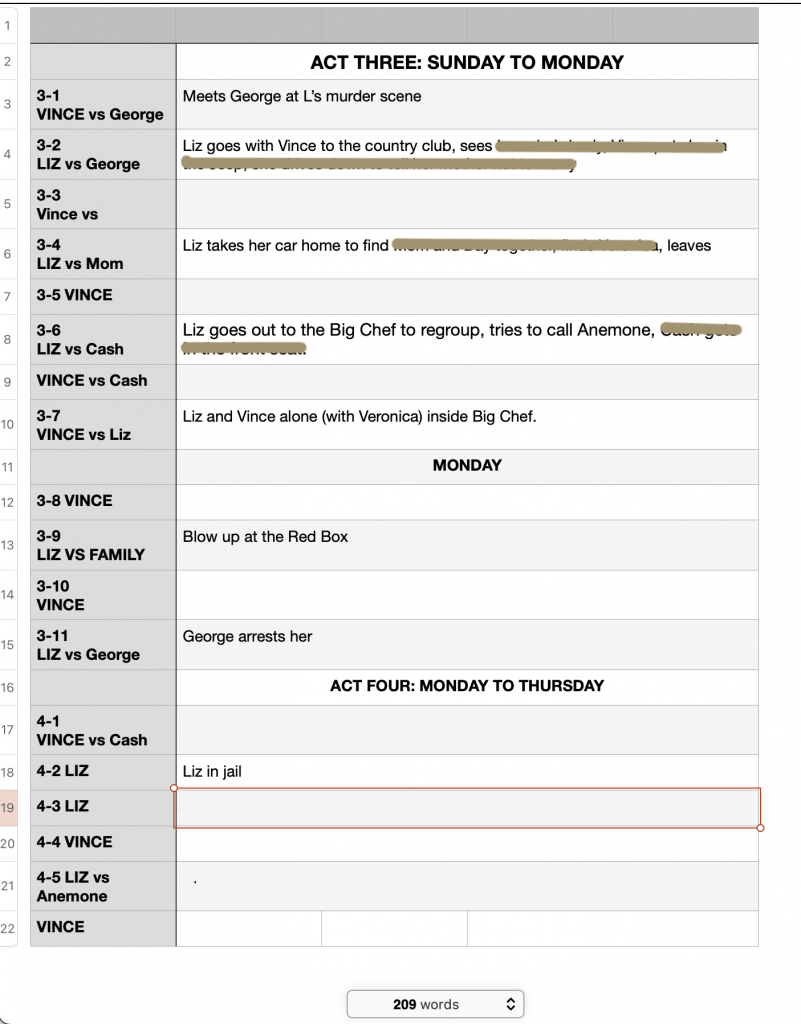 (4) The fourth thing is really the key to the collaborative relationship: Respect your collaborator and keep your mitts off the other guy’s scenes with one exception: you can fix your character’s dialogue and actions. If the fix is big, you have to talk about it, but that’s mostly tweaking. Otherwise, they get to write their person the way they want. In the final rewrites, we probably tweak each other’s stuff, but by then it’s pretty easy not to overstep. Track Changes is the best way to do this so the other person can accept or reject. And now I must learn to do Track Changes in Pages (I’m liking working in Pages a lot, plus it comes free with the Mac).

I think this is the hardest thing about collaboration, understanding that this book is not just yours, its theirs, too. You’re going to have to accept some things you wouldn’t have put in the book, and the key is to see how you can use those things, too. If whatever it is goes against something important, you have to explain that, and if you’re not on the same wavelength in the book, that can lead to some major conflicts (only happened to me once) but at the end of the day, unless it goes completely against your grain as a human being, let it go. Bob has objected politely to things I’ve done in books and explained why (and so have my other collaborators) and the explanations were reasonable and made sense, so I deleted those things. He’s done the same for me. We save our powder for the big battles, and there have been remarkably few of those (and one I won he should have won, so that made me more careful in the future).

(5) The fifth thing is probably the most essential to the collaboration’s overall success: Talk to each other often and listen to each other. Collaboration is just that, two people working together, not one person in charge, dictating to the other, or two people writing separately and then shuffling scenes together, collaboration is an active partnership, and communication is the key to any partnership. My collabs have always been online with brief in-person meetings to hash things out, and the great thing about online is that you have a record of what you’ve said. 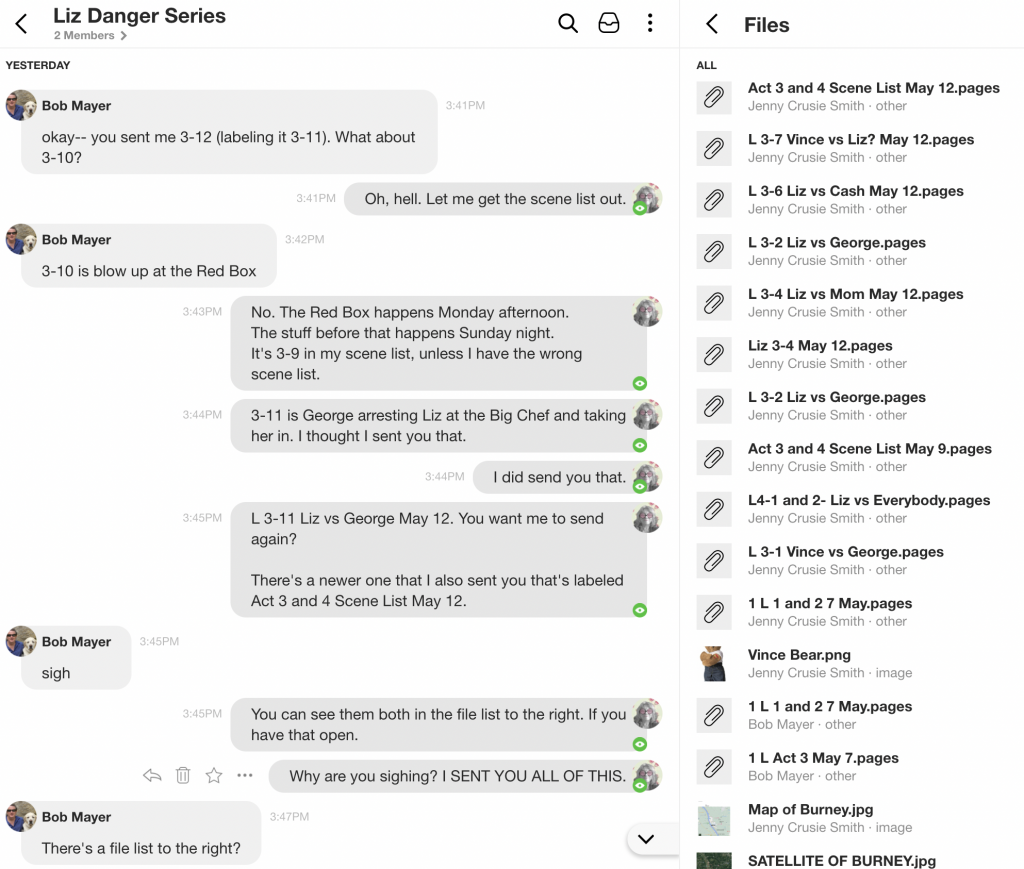 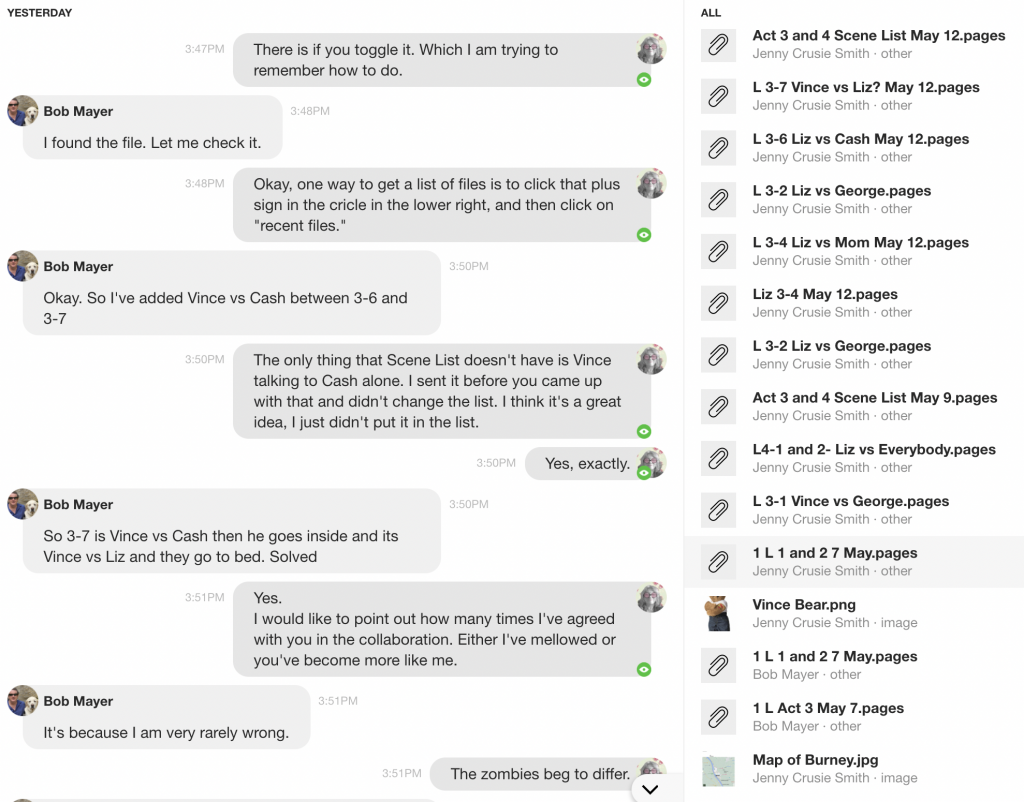 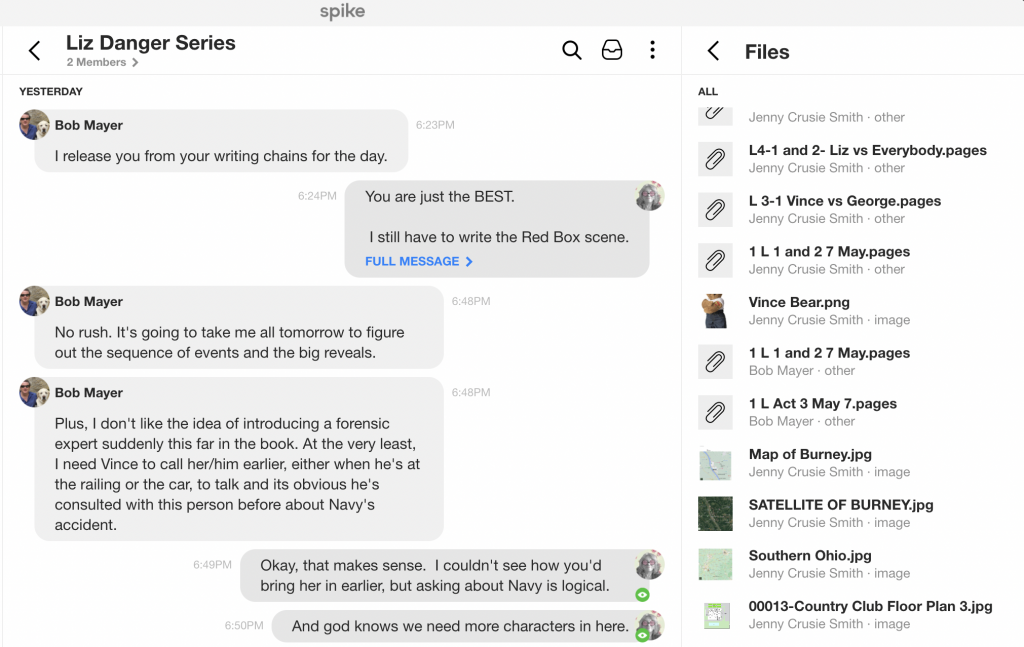 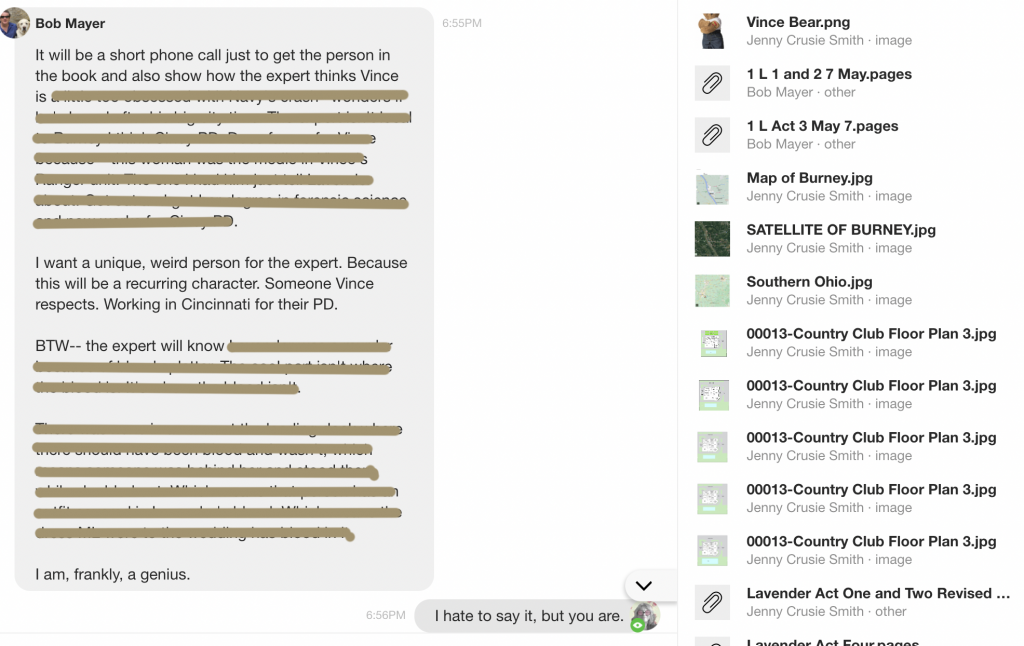 (6) The sixth thing is to be respectful when you talk to each other: 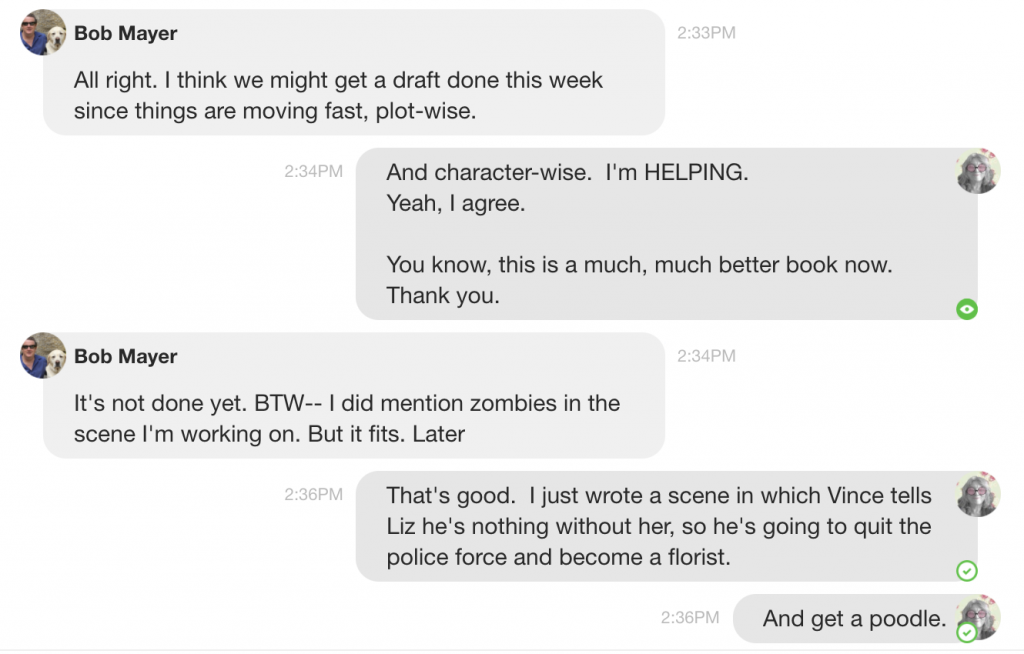 And that’s how I collaborate.