NOTE: I put Deb Blake’s author post up two weeks early by mistake, so it’s going up again in May. My apologies to Deb and everybody who tried to get the book now. Here, have a different post as an apology.

So Lavender’s Blue is moving along at a much faster pace now that Bob’s on board. Of course he’s also writing his sequel to Shane and the Hitwoman and now he’s taking three days off to go mountain climbing, so on Thursday when he gets back, I’ll be waiting for the “book done yet” e-mail that will lead me to say cruel things to him. In other words, it’s just like old times.

When we first started writing together, a million years ago, I told him that I had to do a discovery draft first so I never outline before that, and he explained that he outlined his books first (IN A SPREADSHEET, FOR CRIPE’S SAKE) and then wrote them in one draft. He also mentioned that writing without an outline was “daft,” and I bitched about being called “daft” on here, and he said he’d never said that, and I sent him a copy of the e-mail in which he said it, and he changed the subject. So now that we’re collaborating again, I showed him the act outline I was using for the revisions on the first two acts, and he said, “I don’t use acts, I just write whatever I want so I can see what happens.” And I said, “Well, I need acts or my stories go all over the place.” And then we looked at each other in e-mail and realized we’d switched brains in the past twenty years. I don’t care, we’re writing in acts. He’ll thank me later. Well, no he won’t, but he’ll be silently grateful. I’m sure.

The thing I’m remembering now is that while we fought a lot, it was never about the book. We both wanted the best book we could possibly do, so we really didn’t argue much about the content, we just discussed it a lot. Well, I discussed it. Bob said, “Just write it, I’ll fix it later.” He’s still saying that, and I’m still writing in acts, so we may end up killing each other anyway, but I don’t think so. For one thing, the book is good. For another, he’s fixing my plot and writing Vince, so I’m grateful. But the biggest reason is that we’re not standing next to each other. As Bob said once, we should never be in the same zip code.

I just wrote him a long e-mail about arcing the romance and the sex scenes in the first two acts. Bob does not like long e-mails, and he’s not crazy about writing sex and romance, either (that’s what I’m for). Since I have no idea if he’ll read it, I’ve reduced it to one sentence and sent that to him. He usually reads the one sentence e-mails. In this case, it’s “I know you didn’t read that last 904 word e-mail, so here’s what I need to know: Where Vince’s head is at Thursday night, Friday night, Saturday night, and Sunday night.” And I just realized I should have written “What Vince is thinking and feeling” instead of asking where his head was, but I am confident that Bob will be mature and not go there.

We’re working with a new e-mail program that neither of us is sure about, but it has one wonderful feature: it puts your e-mail exchanges into a format that looks like chat, so you don’t have to follow e-mail threads, you just read the conversation. Like this: 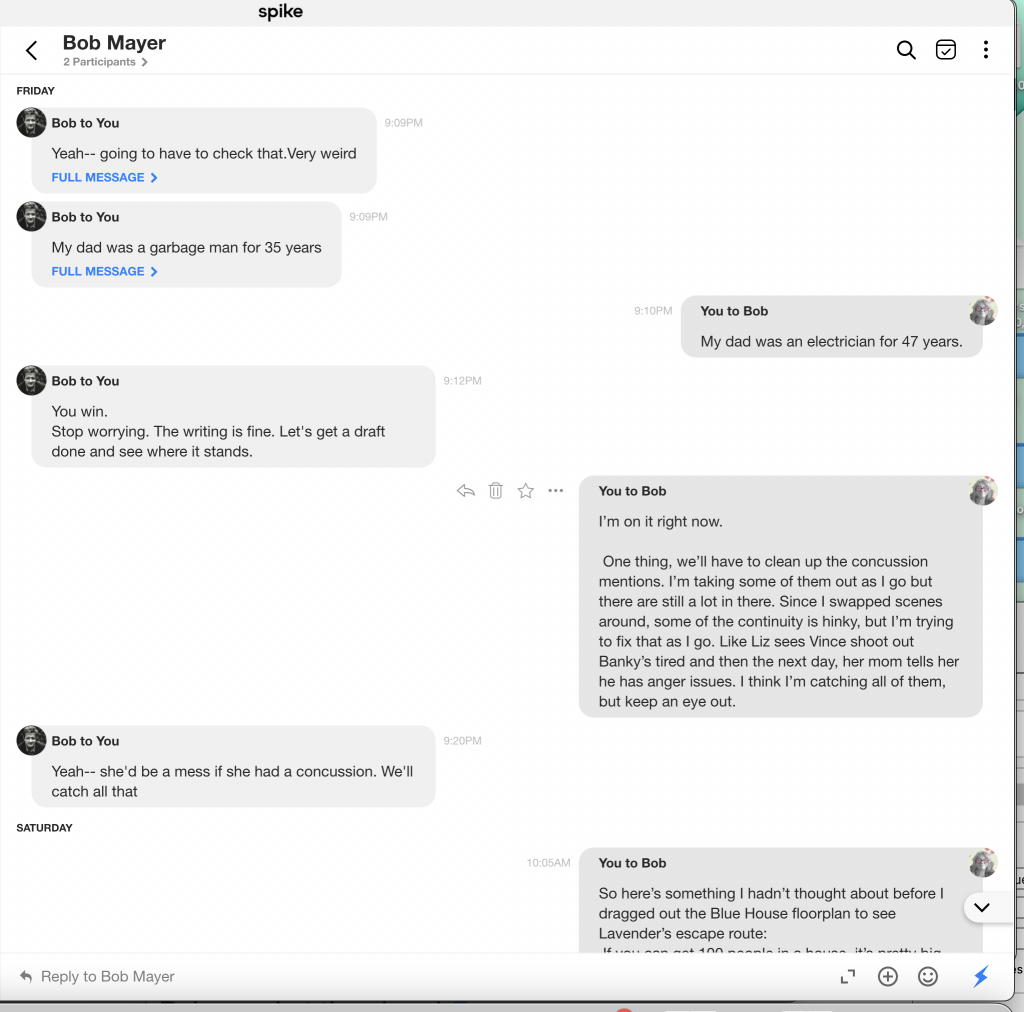 Right now I’m researching weddings. I hate writing weddings. I’m not crazy about weddings in general which is why I eloped. I didn’t mind the wedding in Agnes because I didn’t really deal with it, but the wedding in this book is key, so I’m researching wedding customs, making sure I’ve got the processions down the aisle right, the way the reception works, the whole borrowed/blue bit. It’s good because I can use it all to build the story tension but it’s writing about a ceremony that is not something I get invested in. I already told Bob that Liz and Vince aren’t getting married. He, of course, doesn’t care. He’s ignoring the wedding to plot the murder and some other crimes.

There’s a raccoon in my kitchen. He comes in nightly and forages even though there’s nothing there for him unless he learns to open a can or the fridge door. I went into the kitchen Monday night at 2:30 AM (okay, Tuesday morning) to get a Diet Coke and the little bastard was sitting in the window between the kitchen and the workroom. If he’d had any respect, he’d have run for it, but he just sat there calmly, waiting for me to leave, looking vaguely annoyed that I was encroaching on his time. So I threw a potholder at him. Gotta fix that hole in the back door. He’s a cute little bugger (I’m trying not to name him but I think he’s a Bernie) but his last act was to tear open a bag of flour I had somehow left out. This does not strike me as a raccoon snack, so I assume he did it to annoy me. Definitely fixing the back door. Later.

I’ll fix it later because I have a book to write and a collaborator who is going to come back from the mountains expecting 65,000 words of a novel with no scenes missing. The last thing I need is both Bernie and Bob annoyed with me.

Later:
Bob wrote back before he left for the mountains and opened a new can of worms when he answered my question. He’s gonna have a lot of e-mails from me when he comes back down on Thursday. One of the many nice things about this new e-mail app is that I can see when the emails have been read, so I know he’s already read them and is now going to be up in the mountains, stewing over the problem, which is not what I want, but I need the answers, Bob. Trip to the mountains done yet?

Collaborating: It’s a lot like marriage, you have to keep working on the relationship or somebody leaves and goes to a higher plain.