This is my life right now: 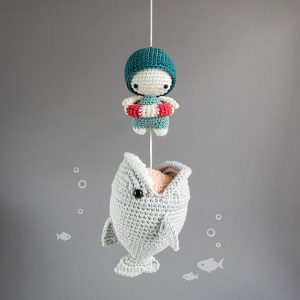 If you pull the string, it plays “Beyond the Sea” as the fish goes up to swallow the oblivious swimmer.

My previous this-is-my-life image was this: 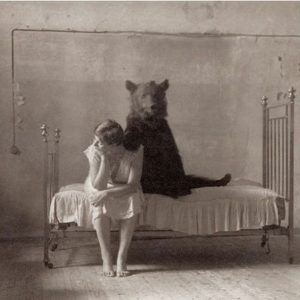 So you can see that life has gotten tenser. Or I’ve gotten more clueless. Hard to tell.

I told my therapist that I have really good taste, and she said, “I know, I’ve seen your clothes,” and I laughed because we were on computers and she couldn’t see what I was wearing: a baseball shirt with the words “What does not kill you makes you stronger. Unless it’s bears. Bears will kill you.” I’m sure Vogue will calling at any minute to get a picture of that.

I still kinda want that “There are two kinds of people in the world, the kind that can extrapolate from incomplete data . . .” tee.

I’m watching my dogs eat Chicken McNuggets and feeling sorry for them because they have no thumbs. God knows what the world would be like if dogs had thumbs. (I don’t even want to think about the world if cats had thumbs.) On the other hand, they’re dogs eating chicken nuggets, so they’re not suffering. But still, their lives would be so much easer with thumbs.

Krissie and I have been discussing the plotting of sex scenes, specifically when to have them happen in the plot, and for me it always hinges on the character. I mean I like to see the relationship progress first, but I also like Anna picking up Nate in the first chapter, so it really depends. I told her I was not good at writing sex scenes, at least in the context of the New Age romance scenes that are explicit (that’s not a criticism, some of them are good and crucial to the plot, see Kennedy’s The Deal), but that’s not something I’m good at writing. Krissie pointed out that one of my sex scenes was good enough that somebody plagiarized it, and that was a little comforting. But still there’s a reason I’m better at bad sex scenes than good.

How’s my week going? A raccoon ate my croissants.

And I had to buy a new computer. I always end up buying a computer because my last one died (one before this one had a huge crack in the screen, this one had a fried motherboard thanks to liquid under the keyboard which I do not remember spilling, but the computer was definitely dead and I trust the Genius Bar), which means I don’t get the thrill of buying something for pleasure (see car). It cost the earth because I need a big screen, plus it’s in this dull gray that looks like a laptop on the Death Star. OTOH, the screen is huge (16″) and aside from the hassle of getting everything back in place, it’s a joy to work on. For one thing, when I type an “a,” I only get one “a” instead of the three my last keyboard was giving me. I am still looking for my desktop, and Microsoft Word is ghosting me even though I’ve owned their damn software for decades, which come to think of it is probably why they want me to buy it again, but in general, the transition was pretty seamless. I can’t blame Jobs for Gates’ greed.

It’s snowing here. Coming down like a mother. Tomorrow it will be fifty, and much will melt but I have to drag the trash out today. It’s been in the forties and fifties so far this month, but on the day I have to drag the trash to the street (not that far), it snows, probably for the last time (I hope). I’m starting to think the universe hates me.

Next Day Update: I finally got Dropbox back, but Microsoft definitely hates me. It won’t let me into my Word files and I’ve spent hours trying to get help from them only to find out they’d overwritten my old paid-for program with the new on which is why they keep telling me I have to buy it. So I just put Word in the trash. Screw you, Microsoft. Hello, Pages.

And I didn’t get the trash out to the street. I took Mona to the vet on the wrong day. I tried to cut back this monster thorn bush and now I’m covered in scratches and welts. I still don’t have the taxes done.

OTOH, it’s a beautiful day and I don’t live in Ukraine. It’s one of those two-sides things. Ukraine is suffering terribly, but nothing is going right for Putin, and the rest of the democracies in the world appear to be getting their heads out of their butts, and there’s some hope for a better future. And I’m not suffering terribly but it’s tense here and I’m doing some silent screaming, but it’s also a beautiful day, and the thorn bush is trimmed back and I can probably get the rust out of my new dress, and the dogs are happily chewing on chew sticks, and Emily has climbed on top of a pile of clothes and is snoozing like a house cat instead of a stray, and my future looks brighter (she said softly so fate wouldn’t drop kick her). There are always setbacks (I’m not talking about Ukraine, that’s an obscene ongoing tragedy) but life goes on and so do we. There’s beauty everywhere,I just have to pull up my socks and get to work.

(Another good thing: I have great socks.)

Which brings me to W.H.Auden and this wonderful essay in the NYT by Elisa Gabbert that’s the best thing I read all week. At quarter to six this morning, still having not gotten to sleep, Gabbert and Auden and Brueghel stunned me with the beauty in the world all over again. I’ve read the poem a dozen times before, seen. reproductions of the painting even more, but early this morning, this essay made them both new again and made me think about something besides my tense but incredibly fortunate self.

So now I’m snuggled up in bed with a new laptop, a dachshund, a poodle, a Maine Coon, a Diet Coke, a Hot Pocket, new gorgeous yarn (just came in the mail), a new word processor, and my taxes.

Nothing but good times ahead.