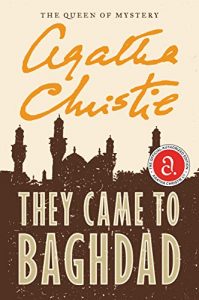 After a bad week followed by a worse week, I needed something non-stressful to read and BookBub had Agatha Christie’s They Came to Baghdad for $1.99, and I hadn’t read it, so I bit. There’s no sex, very little violence, a rapid plot, and her usual anemic romance, but this one has a protagonist, a heroine, who was really fascinating. One of the characters in the book describes her as aa nitwit with common sense, but I don’t think that’s right. She rushes into things, and she’s about as deep as a puddle, but she has an excellent sense of self-preservation and an openness and enthusiasm about life and people that means she has zero angst. She thinks, “I want that,” and then goes about getting it: following her crush to Baghdad, pretending to be somebody she’s not, escaping from a locked room, if Victoria wants it, she’ll get it. She’s also an expert liar because she enjoys lying, improving on reality to make it more interesting or to bend it to her needs. I loathe liars but by the end of the book, I admired her. She’s not stupid, she’s just not good at thinking, but she’s great at noticing and remembering and acting in the moment. She was a great escape for me after a run of bad time.

What did you read to escape this week?