NOTE: I didn’t mean to publish this. I was looking for an old post and republishing posts that had gone down in the hack and I thought this was one of them. It’s probably a year old and never got posted at the time. Now that it’s up, it can stay up (I still have hundreds of posts to re-publish, but I’m on it, I swear).

Romance fiction, that is.  This is probably just the cranky part of my brain talking (the nice side of my brain rarely speaks), but the blurbs on Bookbub are making me surly.

For a while it was the “Can he protect her?” stuff that was making me crazy, the Navy SEAL who’s protecting the little blonde from her abusive ex, the tough cop shielding the single mother of an adorable moppet from the mob, the any-guy-with-abs flinging himself bodily in front of whatever woman appears to be threatened.  I kept thinking, “What happened to women protecting themselves?  Why are we all of a sudden an endangered species?”  I know it’s a big fantasy, having somebody to stand between us and the ten thousand jerks and creeps who haven’t gotten the #MeToo message, but why all the wimpy heroines?  It’s annoying that on some days every damn romance novel in the e-mail has abs on the cover and a cowering woman in the pages.

And then lately I’ve been scowling at all the her-high-tech-career-tanked-so-she-went-home-to-do-more-womanly-things plots.  These heroines all move back home (it’ll be a cold day in hell when I even drive by my hometown’s exit again) and then open B&Bs where they can feed people and snap sheets, or they redecorate neglected houses, or they open bakeries so they feed people bread and sugar, anything that’s based in Good Womanly Virtues instead of those nasty high-achieving goals they failed at.   Look, I love to cook and bake, but I wouldn’t give up my writing career to do it, or my teaching career when I had one.  And I love rehabbing old houses, which is why I’ve never made a profit on any real estate transaction in my life, but again, not as a career (obviously, see lack of profit above).  I have no problem with people changing careers, I just want to know why so many damn BookBub romance heroines are failing and returning home to fifties virtues.

Here’s the thing that bugs me: I think that romance tropes answer to the prevailing social and political trends.  In the seventies, there were all those rape romances that told women that they could recover and even triumph over rape because the seventies were a really bad time when rape victims were put on trial as much as their rapists, and when date rape was still “you shouldn’t have had too much to drink.”  In the nineties when marriage in America really started to implode, suddenly we were inundated with baby romances, assuring women that they could find true love, even if they were toting diaper bags.  So now here we are in the tens and romances are assuring us that a guy will be there to protect us and we can go home again, especially if we’re leaving a business suit to wear an apron?

Yes, I know, I’m overreacting.   It’s a specialty of mine.  But this is ANNOYING. 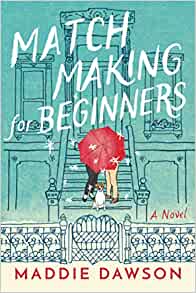 I FINALLY found a new book that is at least a Sorta Sure Thing, I’ll know after I reread it, which I definitely plan to do: Matchmaking For Beginners. Just loved it.

What did you read and love this week?

Oh, thank god, January’s over. Another month closer to spring.

Between the cold and my cold, I haven’t done anything that makes me get out of bed except for letting the dogs and cat out and in, a job that requires me to stand in the doorway and say, “Are you out of your minds? It’s FREEZING out here. Come back inside, quick.” I have to get something done soon. Maybe tomorrow.