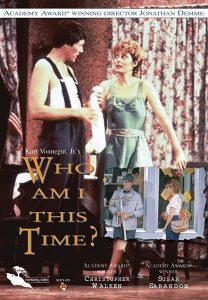 I recently tripped over a video I loved so much I used to teach it to my high school classes. It’s from a Kurt Vonnegut short story, “Who Am I This Time?” and it’s a delightful romance starring a very young Susan Sarandon and Christopher Walken (filmed in 1982 for American Playhouse) about two socially inept people who meet when they’re cast in a small town production of A Streetcar Named Desire. (If you search, you can find it for free, but I always think that’s iffy.)

Great old movies make me happy. What made you happy this week?