I’ve been crocheting again and remembering how wonderfully soothing it is. There’s something about really great yarn–and I have Felici and Hawthorne, so I have really great yarn–that is just valium for the senses, color and softness and weight. Right now I’m just noodling around with it, but I am working on cardigan, making it up as I go, that I’m really happy with. Yarn is good. 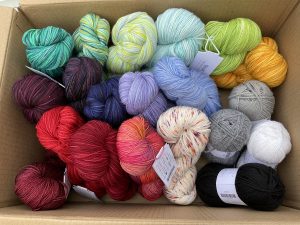