Our own Deb Blake has a new book out, Doggone Deadly, and it sounds doggone good. (Pause for moan from Argh People over lame opening line.). It’s the latest in the Kari Stuart Catskills Pet Rescue Mystery series. If you’ve missed Deb on here (it’s possible, her anti-spam software had a spat with the blog and she was tragically exiled for awhile), Deborah Blake is the author of the Baba Yaga Series from Berkley (Wickedly Dangerous, Wickedly Wonderful, Wickedly Powerful), as well as the Broken Rider Series, and the Veiled Magic series. She has also published eleven books on modern witchcraft with Llewellyn Worldwide, along with a tarot and an oracle deck. When not writing, Deborah runs The Artisans’ Guild, a cooperative shop she founded with a friend in 1999, and also works as a jewelry maker, tarot reader, and energy healer. She lives in a 130-year-old farmhouse in rural upstate New York with various cats who supervise all her activities, both magical and mundane. 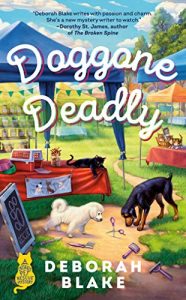 But enough about Deb. What Doggone Deadly about?

When the woman who is supposed to run the local dog show calls out sick, dog groomer Suz is asked to take over. But it’s too much for her to handle by herself–especially with the president of the kennel club, Olivia Weiner, criticizing her at every turn–so she calls in her best friend, Kari Stuart, with the promise that Kari can set up a fund-raising and kitten-adoption station at the show.

A long and stressful day goes from bad to worse when a local breeder’s body is found in the supply tent, with Suz’s signature purple-handled shears embedded in her chest. Kari doesn’t think for a second that her friend is capable of murder; the police aren’t so sure. But trying to run a dog show and investigate a murder at the same time is like herding cats, and Kari will have to rely on the rest of the Serenity Sanctuary staff to keep things running smoothly while she–and her beloved and clever kitten, Queenie–sniff out the truth.