Bob’s follow up to Agnes and the Hitman, Shane and the Hitwoman, is out today, with a kickass heroine named Phoebe and more wedding snafus. It’s back to Two Rivers with another wedding debacle in progress and Rhett drooling on everything, but the danger is new and international and worse than that, Shane’s going to have to deal with his relationship with Agnes as their careers collide. 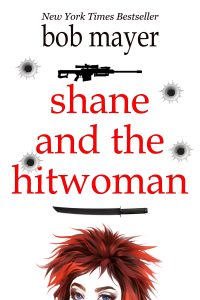 No one warned Shane or Agnes that it was going to be a red wedding. It’s eight months after the first, bloody, wedding at Two Rivers and things have calmed down and seven weddings have been hosted without a problem. But no longer.

Bring on an eclectic hitwoman, an amiable Duke, an icy Duchess, a lot of sharp swords, a crazed ex-Duchess, a computer hacker and a dog named Rhett, and you’ve got a recipe for an action-packed, hilarious novel about the perils and promises of commitment.

Shane has no idea when he’s hidden on a snowy hillside with his sniper rifle on a job for the Organization, how the mission connects to a pending wedding. The operation goes to hell and he’s rescued by his back-up; a younger, diminutive operative named Phoebe, who is armed with a short, but very sharp sword and an even sharper tongue.

A ‘small, intimate wedding’ is what was promised. But too late he learns that it involves the fate of a small, but powerful European kingdom. At stake for Shane? Not just his life and Two Rivers, but his future with Agnes and the Organization. For Phoebe, an up and comer in the Organization, it’s her chance to show what’s she capable of. But standing in the way is the crazed ex-wife of the Duke, a mountain of a man armed with a very big sword, and a traitor within the ranks of the Organization itself.

Who will be left standing and what will their future look like?

You can buy Shane and the Hitwoman at any of these sites or just go straight to Amazon here.