I’ve always thought the enemies-to-lovers romance was a kind of bias-to-understanding story, close-mindedness to open, if you will. Which brings me to my bedroom.

A couple of months ago, I adopted a stray cat with only three paws but a lot of attitude (pretty sure she’s a Maine Coon). She was scrawny and wary and she had no idea what a litter box was for, but she needed a home and I had one for her, if I could just convince her to stay (and that the litter box wasn’t her bed). 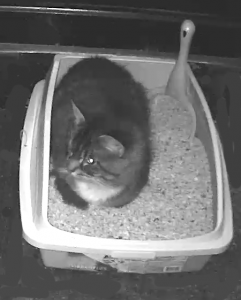 After trapping her inside (she wasn’t amused) I won her over with expensive cat food and fresh water and a heated cat bed and she had the back bedroom all to herself so life was good. Then Krissie came to visit and the dogs and I had to get out of her bedroom and back into the summer bedroom with Emily. There were a few tense moments, but that’s all behind us now, probably because the dogs are very mellow (well, Mona is mellow) and Emily after months of good eating is now bigger than Mona and roughly the size of Veronica. And now when I sit in bed and look out at the tree tops of my back yard I have three roughly fifteen-pound pets snoring in harmony.

That makes me happy.

Other Emily news for those who have been asking:

Emily was a stray for at least two years (according to my neighbor) so she was never going to be an inside cat completely. She wasn’t crazy about the dog door (neither are the dogs, too much work) but something clawed a huge hole in back door so she can get in and out at will. The thing that’s important is that she always comes back, and most of the time she doesn’t bother to leave. Emily knows a good thing when she has one.

They’d met before this and had pretty much decided on staying five cautious feet away from each other, Emily glaring, Veronica hot to lunge but knowing she’s not allowed, and Mona perplexed, but it’s been a week now and they’ve settled in. They’re not exactly buddies, but I’m thinking that they might come to like each other, curl up together, accept that even though cats and dogs living together appalled Bill Murray, it can be done if everybody is just open-minded and remembers that the woman telling them “NO” when they begin to narrow their eyes is their source of food, this will all turn out just fine.

Now my only problem is the raccoon that keeps coming in to eat kids’ food. Yes, I’m sure it’s a raccoon, I caught the little trash panda in my kitchen, trying to open my bread box. (The day before he’d knocked it to the ground and lunched on my sour dough.). I’m pretty sure that’s where the hole in my back door came from. The back of the house is going to have some interesting moments when Rocky meets the dogs, so it may all work out just fine.

How much is this like an enemies-to-lovers romance? Well, they’re sleeping together now, so I’m pretty sure we’ll get an HEA. (Yes, that’s Emily’s paw on Mona’s neck. Gently.) 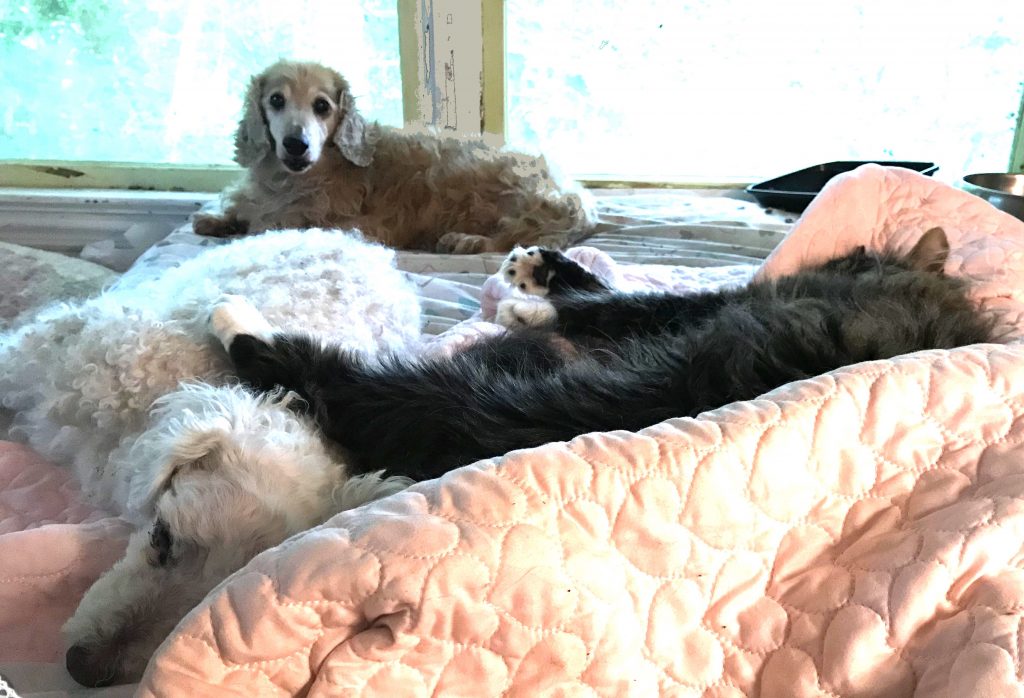 72 thoughts on “Happiness is Cat and Dogs, Living Together”