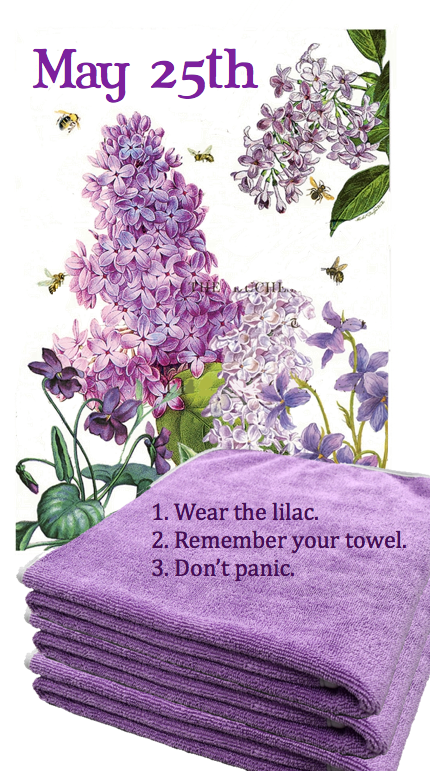 May 25th, as all Douglass Adams readers know, is Towel Day, the day to flaunt your towel in memory of an amazing author, who gave the best general advice of all time: Don’t Panic.

May 25th is also, as any fan of Terry Pratchett should know, Wear the Lilac Day, in honor of the events of the Discworld People’s Revolution (see Night Watch) whose rallying cry was,”Truth, Justice, Freedom, Reasonably Priced Love, and a Hard-Boiled Egg!” And after Pratchett’s diagnosis of Alzheimer’s, Wear the Lilac Day has been used to raise awareness and funding for Alzheimer’s research.

Because of this, today is the day that Argh Nation Wears the Lilac Towel in honor of these two great authors. We shall never forget (although we may be a little absent-minded at times and are easily distracted). Thank you, gentlemen, for multiple weirdly great characters in many twisting, startling plots not to mention brilliant observations on life in general and some of the funniest, smartest writing in specific. You are missed.

Here, have an Adams/Pratchett quiz. Who said what?

1. “I may not have gone where I intended to go, but I think I have ended up where I needed to be.”

2. “Sometimes it is better to light a flamethrower than curse the darkness.”

3. “Solutions nearly always come from the direction you least expect, which means there’s no point trying to look in that direction because it won’t be coming from there.”

4. “If you don’t turn your life into a story, you just become a part of someone else’s story.”

5. “A learning experience is one of those things that says, ‘You know that thing you just did? Don’t do that.”

6. “The trouble with having an open mind, of course, is that people will insist on coming along and trying to put things in it.”

7. “Let’s think the unthinkable, let’s do the undoable. Let us prepare to grapple with the ineffable itself, and see if we may not eff it after all.”

8. “In ancient times cats were worshipped as gods; they have not forgotten this.”

9. “The ships hung in the sky in much the same way that bricks don’t.”

10. “Getting an education was a bit like a communicable sexual disease. It made you unsuitable for a lot of jobs and then you had the urge to pass it on.”

11. “This must be Thursday,’ said Arthur to himself, sinking low over his beer. ‘I never could get the hang of Thursdays.”

12. “Sometimes glass glitters more than diamonds because it has more to prove.”

14. “It is well known that a vital ingredient of success is not knowing that what you’re attempting can’t be done.”

15. “The Answer to the Great Question… Of Life, the Universe and Everything… Is… Forty-two,’ said Deep Thought, with infinite majesty and calm.”

16. “Light thinks it travels faster than anything but it is wrong. No matter how fast light travels, it finds the darkness has always got there first, and is waiting for it.”

17. “There’s always a moment when you start to fall out of love, whether it’s with a person or an idea or a cause, even if it’s one you only narrate to yourself years after the event: a tiny thing, a wrong word, a false note, which means that things can never be quite the same again.”

18. “Stories of imagination tend to upset those without one.”

19. “Words used carelessly, as if they did not matter in any serious way, often allowed otherwise well-guarded truths to seep through.”

20. “Do you not know that a man is not dead while his name is still spoken?”