Our own Cate M has a new book out, The Last Big Fake, writing as Kate Kerns:

From forger to fake fiancée, Darcy’s life hasn’t been exactly authentic. But her growing feelings for the man she has no intention of marrying might scuttle her plans to play “let’s pretend” one last time. 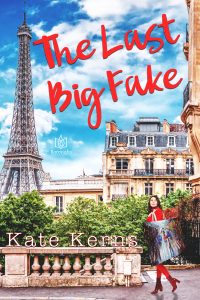 When Seth offered Darcy a job in his upscale art gallery, he had no idea she’d be volunteering to play his fake fiancée two years later to help him keep his inheritance out of his nefarious brother’s hands. He also has no idea he unwittingly hired an art forger.

When Darcy and Seth arrive at the family chateau, she learns Seth’s estranged brother is none other than Victor, her dangerous ex-boss from her forgery days. Victor tries to blackmail her into doing one last forgery, or he’ll tell his brother her ugly truth. Before knowing Seth, she might’ve caved. But there’s more to Seth than just the honorable, sexy nerd on the other side of the office wall – and the other side of the bed. Darcy has to decide: Does she disappear to save herself? Or does she pull one last, risky con?

Find out more about author Kate at her website.

And buy on
The Boroughs Publishing Group
and Amazon Kindle.