I started a book I was really enjoying and then, somehow, got frustrated with–it involved the protagonist deceiving somebody–I just turned to the back to see how it came out and dropped it. I’m wondering if the single first person voice didn’t just become so annoying in its cluelessness or maybe in it’s over-the-top-ish-ness (which I originally loved) that I just gave up (there’s some pot-and-kettle going on there, I’m sure, since I’m sure my voice eventually grates, too). Great character, great voice, interesting community, but she kept charging around missing things. 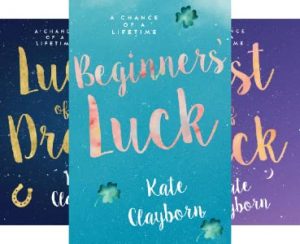 On the other hand, I read a three-book series–classic modern romance, nothing innovative–about three women who’d gone together on a lottery ticket and won big. The lottery bit wasn’t a big deal, although I did wonder why they weren’t overrun by scammers, but their individual stories were different and interesting and none of the men they met would dream of sending a dick pic. They were good comfort reads, and since it was a series, I could settle into the community. I do not discount the benefits of comfort reads, especially right now as my world is coming back to life: Kate Clayborn’s Luck Series. (Note: All three had Big Misunderstandings that made me groan, but she cleaned them up nicely.)