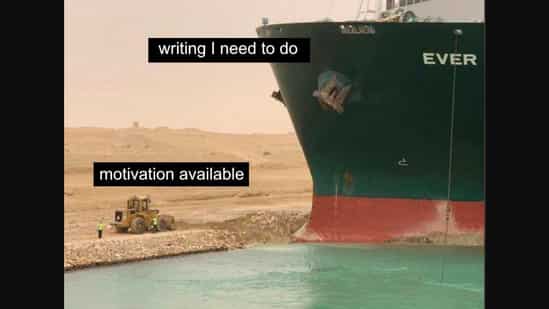 My current fascination is the Ever Given, the huge ship stuck sideways in the Suez. For one, it’s such an apt metaphor for my life, especially with Nita in front of me, sideways, on my laptop. For another, the memes are hysterical. (I’d have used this for the happiness post, but it seems mean since the Big Boat is blocking 12% of the world’s shipping, which somehow makes the world seem smaller and more understandable but still hard luck on shipping and anybody expecting anything from China.) I can’t pick a favorite. There’s the “Steal His Look” meme which is a great visual joke, there’s the “This is the most action Cape of Good Hope has gotten since 1850″ which makes me feel smart because I get it (I like a low bar), and there’s the Evil of Sauron and two hobbits . . . I love them all.

I think the world just needed a big boat stuck in the Suez Canal right now.