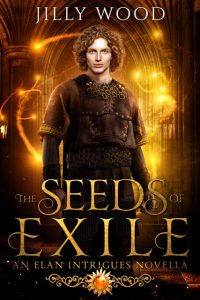 How can a man not know his brother? Prince Daire of Caldermor and his heir, Prince Warrick, were raised apart. Daire’s showy. Warrick’s stuffy. All they have in common is a shared secret duty—Daire creates elan, mysterious golden beans that assure their family wealth and power; Warrick bears witness. Then Daire discovers that elan-making ravages his body. Internally he’s hurt beyond remedy, but if he modifies the time-honored elan ritual he can save Warrick from suffering his fate.

Warrick knows transforming elan is a privilege. He doesn’t believe it’s dangerous. To prevent Daire from debasing their treasured heritage he claims the throne and battle is joined. The arena: an elan-making duel. The loser’s forfeit: exile.

Daire wants Warrick beside him, not banished, but he’ll need insight and guile to win the duel without losing his brother—or breaking the ancient Legacy that protects Caldermor.

The Seeds of Exile is the second book in the Elan Intrigues historical fantasy series, though it can be read as a standalone. Expect a pacy novella about a quick-witted prince, sibling rivalry, royal politics, elemental magic, and life-or-death stakes.

11 thoughts on “Argh Author: Jilly Wood’s The Seeds of Exile”