I’m buried under work at the moment which is what I deserve for putting several things off for weeks (months?) that have now all come home to roost. I did manage to get the remote camera up to take pictures of the stray cat that lives in my garage that I’m trying to lure into the house before the temps drop below freezing on Friday. Because what I really needed was another job with a deadline. Argh.

Picture of stray cat in garage: 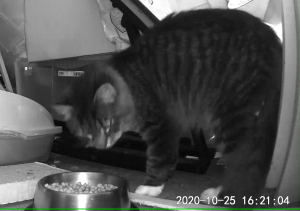