I’m trying to write a blurb for Anna (Krissie just sent me her blurb for the book she’s working on, so I thought I’d try Anna’s), and for some reason, it wasn’t until the fourth graph that the Lucy-and-Charlie other shoe hit the ground like an anvil: 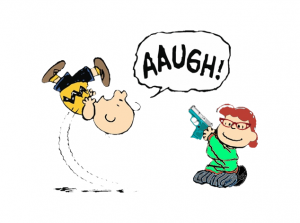 Here’s the first draft of the back cover blurb. Note “first draft.” This is too long and too awkward.

When Lucy meets Charlie . . .
Anna Jones is looking for payback sex when she picks up a hot suit in a Vegas casino. After a night of passion and Snickers, she kisses good-bye the guy who calls her Lucy and thinks fondly of the man she’s named Charlie, no regrets, except maybe about eating his waffles and letting him go . . .

When Anna meets Nate . . .
Back in Jersey, Anna is tangling with her new boss when the FBI shows up: turns out Charlie is really Nate and is gainfully employed by the government to investigate the third-rate museum where Anna works. Also, he’s still hot. But Anna had executive fantasies, not federal agent dreams: Nate is not what Charlie seemed and that’s a deal breaker.

When Nate meets Anna . . .
Meanwhile, Nate’s pretty sure sweet, innocent Anna is not possibly involved in anything criminal, but then he meets her mother, finds out about her grandfather, watches her handle herself in a parking garage and realizes that Anna, no matter how much she looks like Lucy, is a whole new deal, too, and she’s not one he wants to make.

When push comes to shove . . .
But when trouble shows up—money laundering, fraud, breaking and entering, art theft, assault, and a champagne fountain to be avoided at all costs—Anna and Nate begin to fight crime together and see that they have a lot in common with Lucy and Charlie after all, and that maybe there’s time to make one last deal, forever.