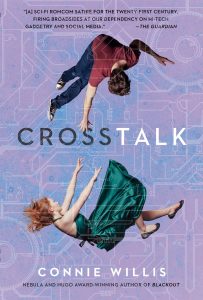 Best book I read this week: Crosstalk by Connie Willis. Loved it, even with the quirky relatives (that whole “elderly people are just so cute” is not my fave trope, but it worked here because (spoiler) they turn out to be not that damn cute). Hyperbole and a Half made me think while I was laughing. Skinny Dip was like visiting an old friend (yes, it’s a multiple re-read). Several BookBub romances that didn’t make the cut. The instructions to my new toaster oven. The week has just been packed.