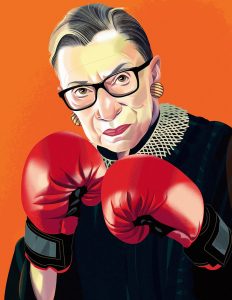 In the “don’t cry because they’re gone, celebrate because they were here,” I am very glad that Ruth Bader Ginsberg fought the good fight for 84 years. WaPo posted a slide show of RBG portraits with some of her quotes that’s cheering, too. Nigel Buchanan in New Zealand did the portrait to the right.

So I’m sad that she’s gone, but I am uplifted by her example and her spirit.

What lifted you up this week?