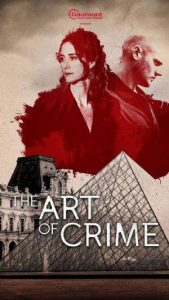 We cover how happy-making it is to find a great book on Thursdays, but it’s also pretty joyful to find a brand new TV series (well, new to me) that makes us want to binge the whole thing. For me, the newest is The Art of Crime, a French series (with subtitles) about a detective and an art historian working on art-related mysteries. They’re both a little bit nuts, although in different ways, and, by the end of the second season, co-dependent on each other as they chase down bad guys in gorgeous French settings–she works in the Louvre so there’s that eye candy plus the roofs of Paris and twisty little streets–set against beautiful works of art. There are two seasons on Amazon (you need a subscription to MHz) and a third season I can’t find anywhere, and it was just renewed for a fourth, so there’s more happy in store for the future. (Where the hell is the third season? It dropping in 2019, it should be on Amazon by now. Grrrrr.)

So what made you happy this week?

64 thoughts on “Happiness is a New Story”