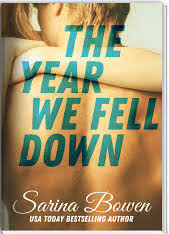 I started reading Sarina Bowman’s The Year We Fell Down, about a college freshman with a spinal cord injury , and when this first-person narrator meets her roommate for the first time, she says . . .

“. . . a little specter of hope had alighted on my shoulder. And this feathered, winged thing had been buzzing around for weeks, whispering encouragements in my ear. . . . Now, facing [my roommate] in the flesh for the first time, my little hope fairy did a cartwheel on my shoulder.”

She has a little Hope Fairy. I rolled my eyes. (Yes, I am a bitch.)

But as the story progressed, the Hope Fairy became less twee, showing up nineteen times in the course of the book to help the narrator undercut the anguish of her situation, and I started to pay attention to what Bowen was doing with her.

Corey, the protagonist, was a star in high school hockey, center and captain of her team, daughter of the coach, living a life dedicated to speeding across the ice with a stick. But as the story opens, she’s in a wheelchair, facing the knowledge that she will never get back on the ice. So she externalizes her hope, evicting it from the rest of her feelings because there’s no place for it in her life.

Bowen does a nice job of personalizing the hope avatar. When Hartley, the love interest, finally makes his move and Cory hesitates, the Hope Fairy shows up, “wearing black lace lingerie, and a pout on her face. Don’t panic now, she insisted. This was just getting good.” When that crashes and burns and all hope of a relationship is lost, the Hope Fairy adapts, “fluttering between chapters of my calculus textbook, spouting theorems. She put on a tiny pair of glasses and perched on the lid of my travel coffee mug. Even better she didn’t mention [Hartley’s] name. Not even once.” She shows up in Corey’s water polo game wearing a bikini and on a New Year’s Eve spent alone in a sparkly dress, and when Corey duct-tapes her mouth shut because she really can’t bear to hope any more, the Hope Fairy flies in at the last moment, just as Corey is telling herself that there’s no reason to hopes again, rips off the duct tape, and yells, “Yes, there is!”

Yeah, I became a fan of the Hope Fairy. But I still thought it was a hokey move until I remembered Dr. Garvin from Agnes and the Hitman, the avatar for Agnes’s burning rage. Pot, meet Kettle. Or at least, Dr. Garvin, meet the Hope Fairy. Agnes isn’t the kind of woman to conceptualize a Hope Fairy, she’s in her thirties and enraged, not hopeless, but it’s the same thing: take an emotion you can’t handle and make it the Other so you can argue with it, try to defeat it, tape its mouth shut, and finally accept it.

And that made me look at the damn Wound concept again.

Corey’s story Wound isn’t a metaphor, so I have no objections to it (my dislike of the Wound in the Past That Explains Everything has been made clear in other places). Her injury is real and recent–she fell eight months ago, and her spinal cord is irreparably damaged–so it’s part of the story in the now, and dealing with it is an ongoing problem for her in the now–physical therapy, trying to find people who don’t see her wheelchair first, getting to a second floor dining hall that has no elevator–complicated by the guy across the hall from her who’s on crutches because he got drunk and fell off a climbing wall, sidelining him from his place on the college hockey team. But Hartley is going to recover and skate again; Corey never will. Enter the Hope Fairy.

New Adult stories (protagonists 18 to 29) are not really my reading taste; I like older, bitter, grumbly, wiser characters (write what you know). But I’ve been deliberately reading in this genre, trying to see how much romance novels have changed (not that much actually and much of it for the better) and I was really caught by this one, rereading it several times, trying to figure out not why I thought it was good–that would be the writing–but why I kept going back to it.

And I think it’s the Hope Fairy.

Okay, not the Hope Fairy exactly, but the character of Corey Calahahn who is looking at a future she can’t bear, and so externalizes her hope in a ridiculously frivolous avatar, the embodiment of how ridiculous hope is in her situation. She can’t scream and cry and break things: this is her life from now on. But she can wall off hope and make fun of it, using the mental focus that made her a force on the ice to survive living off the ice. There’s no big move at the end where the Hope Fairy turns to her and says, “You don’t need me any more, Corey, you’re fine now.” Corey’s never going to be fine. But at the end she’s good, safe and loved and happy, and that’s enough.

So I apologize to Sarina Bowen for rolling my eyes when the Hope Fairy showed up. Her character created a ridiculous, cutesy, sparkly, probably unicorn-loving avatar for an emotion that was fraught with fear and doubt that she couldn’t believe in it anymore, and used that to deal with the incredible pain that believing in the future was going to bring her. I think that’s brilliant.

I highly recommend The Year We Fell Down.

52 thoughts on “Hope Is the Thing With Feathers, or At Least Fairy Wings”