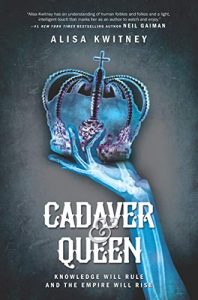 Alisa Kwitney and I were texting and trading book recs the other day and I found out she’d never read Terry Pratchett, a particularly egregious dereliction considering she’s friends with Neil Gaiman. So I told her to read Thief of Time. Then I realized it had probably been a year since I’d read Thief of Time, so I’m going back to it, too, and now, I’m eyeing the Watch series again, possibly the greatest detective series ever written, especially if you like rough justice and hard laughter. I also told her about Ben Aaronovitch because the Rivers of London series is just damn good. She recommended Lucy Parker, and I said, “Definitely Mhairi McFarlane.” About ten minutes into our fast-and-furious texting exchange, the phone rang and she said, “Why are we TYPING?” and we settled in for a this-is-a-good-book swap chat session with frequent asides about dogs and mothers. So this is also This-Is-A-Good-Friend Thursday, featuring Alisa Kwitney, who is also a Good Author and you should read her. Which I am going to do again after I read about Susan Sto-Helit defeating those damn Auditors and finding True Love.

Because Terry Pratchett was a genius, and Thief of Time is proof.