So now I’m thinking about the diner and its specials menu, not because it’s crucial but because it sounds like fun and I get to read about food. 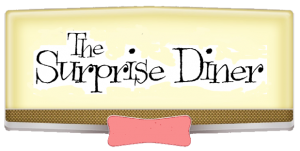 I’m thinking there are the standards, which I’m going to ignore because boring, and then there are the specials, maybe five things that change every week? Trying not to make this more complicated than it needs to be while emphasizing the off-the-wall fun part. I figure variations on a burger, a salad, a soup, a club sandwich/BLT/whatever, some kind of eggs?, and maybe a dessert. Just this week only, never to be seen again? Vanessa comes up with the recipes, Cheryl names them, and then Lily describes them (and double checks with Van), printing them out and paper clipping them to the regular menu.

It just seems like a good time to be coming up with recipe variations, especially burger variations Cheryl has named (not the week she’s a vegan, Van and Lily will block her on that one). And at some point, of course, there will be a Viking Burger, or possibly a Viking Club, or maybe both. The Viking Axe Burger: extra thick chopped beef with sharp Gruyere-some cheese, blood-red tomatoes, and Danish scallions, with sea salt and Sriracha for edge. You know, only better than that, although that actually sounds good.

But that wouldn’t come until much later in the story. Maybe the first week in the story, Cheryl calls one dish “Nobody Died for This Soup” because it’s vegetarian. Maybe not. Over to you Argh. (This reminds me of the time I said, “I need hell-inspired business name, and got “Motel Styx,” “Beelzepub,” and “Pins and Sins.” Good times.)

EDITED TO ADD: Any kind of burger, soup, etc., not just Vikings. I think the Viking burger comes at the end. Also feel free to brainstorm Cheryl’s next obsession. They have already lived through the Feng shui debacle.