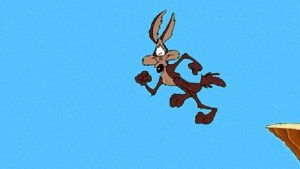 I had a moment of panic–one of many this week on a variety of topics–when I looked at this non-book and thought, “There’s no there there!” Some of you may remember I had a similar moment with Nita. Several in fact. One of the hardest parts of doing a discovery draft is that you’re dancing on air. Remember Wile E. Coyote running off the cliff, doing just fine until he looked down, and then he fell like a rock and usually got run over by a truck when he hit the ground? That’s why you never look down during a discovery draft. If the fall doesn’t kill you, the truck will.

However, five weeks into this I do have to do some cautious looking down.

I mean some of this has to make sense or I can’t go on. So while I can wait to find out what the hell Seb is up to and why there are so damn many Vikings in this, I need to get some of the chronology straight here so I can keep writing. And I want to know more about Lily’s relationships with Van and Cheryl, especially Cheryl for some reason. Okay, it’s because Cheryl’s a Virgo with Scorpio Rising, essentially very practical with a large side order of batshit. Cheryl’s the kind of character who would make a terrible protagonist but makes a great foil (see also Auntie Mame, Jay Gatsby, and Ahab). I’ll figure out the cat later.

Big AhHa moment from the Girls: Lily only has six weeks of therapy left on her insurance so she has to figure everything out in six weeks or she’s on her own. That’s why she sees Nadia six times. STRUCTURE!!!!! (Sorry, I’m very excited about that.)

So instead of putting the new scene here, I’m giving you a link to the first chunk of Act One. It starts with the Meeting Nadia scene that’s been rewritten but not enough that you have to read it again. Then it goes to the new stuff. Then there’s Lily’s scenes with Van and Fin and Bjorn, and then the Fin scene out on the street with some minimal rewriting. So you can skip the first scene and then read until you hit the stuff you’ve already read, but it’s in chronological order now. I’m very proud.