One of the things that’s really hard about discovery drafts is that they’re what Anne Lamott called “shitty first drafts.” The first time I write a scene, it’s lousy. That’s because I don’t know what it’s about until I see it. I can recognize that its repetitive, that there’s no conflict arc, that the characters don’t change, but I can’t fix it until I write it, almost always badly. Nora Roberts said that she can fix a bad page, but she can’t fix a blank page, and that’s where the discovery draft comes in.

Of course with Lily, there’s no pressure because I’m just writing what interests me, not trying to make a whole book. I do love these characters and that diner, but I have no idea what this is about, and I’ll never have to know because it’s just for Argh. So when I left the Seb-fights-with-Lily scene as boring as it was, I did that because there was nothing fun in it, it was just me exploring that relationship and giving Cheryl a cleaver. I love Cheryl with the cleaver. Seb, not so much.

What did interest me was the Fin-ordering-Lily-outside scene. I really liked that for several reasons.

One, it was so Fin. Two, it was real conflict. Three, it was a perfect example of a trope I loathe, the can-he-save-her plot. The SEAL-cop-biker-macho guy swooping in to save the little blonde (in this case, tall redhead). One of the many reasons I loved Buffy was that the little blonde kicked ass and saved the guy. (remember “Go Fish” and Wentworth Miller asking her to walk him home to protect him? God, that was great.). And in this case the SEAL-cop-biker-macho is a Viking, and Lily already has Viking issues. This was just crunchy.

So I wrote the scene outside where Fin and Lily argue, and it was a crummy first draft but still crunchy, there was good conflict and things changed, and I thought, “Wait, wait, this could be good,” because it’s a parallel to the Seb scene. So I went back and looked at them side-by-side and realized that I had a Crazy-For-You thing going here. That is, I deliberately did two parallel scenes in CFY to show that whether or something was abuse depended on whether the recipient wanted it or not. Quinn and Nick were playing at (very mild) S&M, Bill abused Quinn in the parking lot by terrorizing her, but the beats of the scenes were the same. And here were Seb and Fin, with different rationalizations for what they were doing but essentially doing the same thing: trying to take control over Lily’s life.

Lily’s caught up in maelstrom because she’s remembering past lives and they’re mixing with her present life, so she has an entirely new normal to deal with. She’s fighting for her life in the sense that she has to define a new reality and find her place in it, and she’s at least partly immobilized by the newness of everything, and that means that different people will come in and try to define her life for her in the vacuum–Ferris, Seb, Fin, Uncle Louis, lots of people. There’s just too much going on in her head and she needs to deal with the newness and take back control. Yes, Argh People, I wrote the coronavirus into my non-book.

Seb’s caught in a windstorm, too, because his way of life is being threatened, and he’s trying to lock down control, over his uncle who’s going off the rails, over Lily who may know too much, over himself as he panics. I need to get that in his scene.

And Fin is completely calm because he knows that no matter what happens, he will handle it. He’s been doing that for over thirty years, it’s how he defines himself. He’s a benevolent master of the universe. Except Lily’s just kicked him in the teeth because, although she’s completely wrong, of course, he knows for a fact that he definitely needs to save her, she sounds right and that’ll be giving him second thoughts, once he gets over his snit. And then he argues with Bjorn and loses more teeth, so now Fin is having an identity crisis.

IT’S SO FLUFFY! I mean crunchy.

I like all three of them dealing with the same trauma: there’s a new reality being forced on them, and they’re all going to react differently. Lily’s going to try to work it out in therapy, Seb’s going to try to drag everything back to the way it was when he was in control, and Fin’s going to scream a lot and then adapt.

Cheryl will keep the cleaver. Since her reality changes weekly, sometimes daily, none of this is traumatizing her. Cheryl was born going with the flow. And with a cleaver, metaphorically speaking. I love writing Cheryl. It’s like writing Clea and Xan, they’re so batshit I can go anywhere. (Note to self: Put cleaver in collage.)

I’m very pleased with all of this. Now all I have to do is write it.

So what do you think? Wants, needs, expectations? Also, Pangur is now a ginger Norwegian Forest cat. 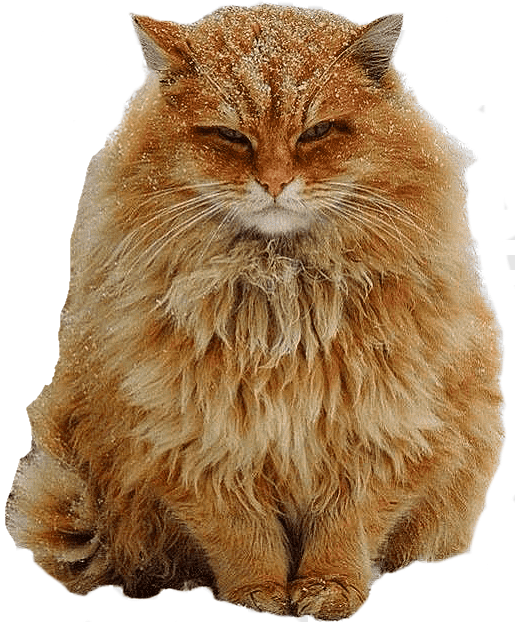