K. M. Fawcett’s latest novel, Fearless (The Survival Race book 2), is out now for 2.99 at Amazon, Apple, B&N, and Kobo.. Fearless is a stand alone story in a series where each couple gets their happily ever after.

Escaped gladiator Kedric wants revenge on the alien rulers who bred him for blood sport and genetic experiments. Nothing will prevent him from leading an attack on his enemy, not even the irritating–yet arousing–spiritual healer hell bent on stopping him. 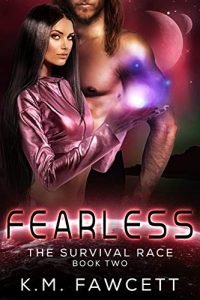 Myia holds the power to heal Kedric’s lust for war…if she can control her emotions long enough to soul jump him. But how can the shaman-in-training find inner peace when the stubborn warlord refuses her touch and ignites her temper?

When Myia embraces Kedric’s darkest secrets, their destinies unite in a fight to save their loved ones. But victory will demand they surrender more than their hearts.