NOTE: The discovery draft in the middle of this post has been revised as the comments came in. Therefore some of the comments won’t make sense any more because I’ve changed the part they commented on. All of the comments made sense in the beginning.

A word about discovery drafts:

A discovery draft is just getting words down on paper. In my case, it’s usually to see what the Girls are up to, so my first discovery drafts are dreadful, rambling things. Hey, you want to see how the sausage is made, you’re gonna see some ugly stuff. In this case, I tried to get into this story all weekend, and it just wasn’t there. The stuff that really caught me? The manuscript illustration, the diner, and Cheryl. I needed a best friend, or at least a friend for Lily, and of course, the love interest who could no longer be named later. Finally this morning, I googled for Norse names again and found one that seemed like it might work (might not), and then because I was dying to, I googled for “manuscript illumination dragon.” And I ended up with the stuff below. Missing is any kind of decent description (I suck at description) of people or place, and any sense of change. That’ll come as I know more, although I already know Lily is thin and sharp and redheaded and nervous, and Fin is big (Viking) and blunt and blond and calm. And none of that is on the page. Discovery draft. First step in the process. Oh, and this is boring. That’s okay, too. If I ever get to a rewrite, it’ll perk up.

Note: If you read this early on Monday, there have been changes. Because it’s a discovery draft and I discover things. This is how it works. Also because I went ahead and did a small character collage and that sharpened things up considerably.

Lily walked back to her apartment, changed into her uniform, and went downstairs to the diner, somewhat buoyed by the fact that Nadia seemed open-minded enough to not assume she was a wingnut. Some days, you took what you could get.

Vanessa was in the kitchen, slapping burgers on the grill. “Watch out for Cheryl,” she called. “She went to another seminar last night.”

“She appears to be vegan.”

Lily stopped to contemplate. “Well, that has disaster written all over it. We’re a vegan diner?”

“No,” Van said. “We’re a regular diner with a vegan proselytizer. So how was therapy?”

“I have a new therapist!” Lily tried to look cheerful as she tied on her apron.

“You told me that already. Fenris something.”

“Ferris. No, I have another one. Ferris was . . . not good.” Lily picked up her order pad. “But I have high hopes for this one. We’re going to meet on Fridays.”

Van looked at her from under raised eyebrows. “All I want for Christmas is sane co-workers.”

“It’s April,” Lily said and went out to the front counter.

Out in the diner, things were relatively peaceful in that time valley between lunch and dinner. Cheryl had been on the job: the stainless counters were polished and the black and white tile floor gleamed and everybody except for the two guys on the end had food, and even they had full coffee cups.

That was upside. The downside was that Cheryl was out at the tables lecturing two college students about the dangers of their burgers, her frizzy blond hair waving as she nodded at them to emphasize her point. The students looked torn between annoyance and confusion, but Lily had been here before. She thought about grabbing Cheryl and telling her they’d get a lot more business if she didn’t drive so much of it away, but if Cheryl eased up, they would get a lot more business and they already had all they could handle, so she left her harassing the students and went down the counter to the two burly guys on the end.

They were big, one sort of blondish with glasses and the other brown-haired with a grin as she approached, and they were youngish, possibly in their late twenties or early thirties, and they were talking quietly so that was a point in their favor.

“Everything okay here?” she said, faking cheerful as she reached them, hoping Cheryl hadn’t done anything rash, like show them pictures of dead animals.

The brown-haired guy widened his grin. “Actually we’d like to order.”

The brown-haired guy got serious. “Two cheeseburger deluxe, medium, double order of fries, some of that coleslaw with the sour cream in it, please. Extra ketchup. Also pie. Lots of pie, but we can do that later. You busy later?”

“I’ll get the burgers on,” Lily said and turned to go.

“Wait,” the sort-of-blond-in-glasses said, and she turned back.

He looked a lot like the other guy, big, blunt-featured and broad-shouldered, but he was calmer, older, sharp-eyed behind the glasses, and he looked like he missed nothing.

“One deluxe, rare,” the blond said, “and one order of fries. And a defibrillator for my brother.”

“That whole order was for you?” Lily said to the brown-haired guy.

“Don’t judge,” the guy said, and held out his hand across the counter. “I’m Bjorn.”

“Of course, you are,” Lily said and shook his hand once.

“And this is my brother, Fin,” Bjorn went on. “And you are?” He looked at the name tag pinned to her apron. “Lily. Pretty name.”

Lily looked at the blondish brother, who nodded at her, perfectly polite, and then went back to doodling something on the xeroxed menu.

Lily looked closer. He had one of those thin black markers that art majors used, “snotty markers” Cheryl called them, and he was drawing a vine in the margin of the menu. He’d already drawn a dragon in there, a very small, writhing reptile, breathing fire on the BLT listimg.

“Wow,” she said, impressed by the intricate dragon, even more impressed as the vine grew before her eyes, beautiful as it twisted up the side of the daily specials. Talented Viking. Competent Viking. Viking Who Doodles. He reminded her of someone. Probably not in this lifetime, though.

“Huh? Oh.” Lily looked back to see Cheryl heading their way with the coffee pot.

What could she possibly say about Cheryl?

“So I”ll put this order in,” she said and went back to the order window. “Three deluxe,” she called to Van and put the order slip on clip.

“Meat is murder,” Cheryl said loudly as she came toward them, so Lily took the pot from her and went to fill the brothers’ cups in apology.

“Cheryl owns the diner,” Lily said. “Your burgers are coming right up. It’ll be fine, the cook is great, and most of the rest of us are sane.”

The blondish one—-Fin-—looked up from his doodle and met her eyes, And she stepped back. “Is there something wrong?”

“Uh.” And then, because she couldn’t resist, she said, “So is Fin your real name?” Were there Vikings named Fin?

“It’s short for Thorfin,” Bjorn said, smiling at her again. “So, Lily–”

Thor. Of course. “Vikings,” Lily said before she could stop herself. “You’re Vikings.”

“There were no Vikings in Ohio,” Bjorn said reassuringly.

“There probably were,” Fin said. “Great Lakes. But that was centuries ago, so no, we’re not Vikings. What have you got against Vikings?”

“I see,” Fin said, and went back to his drawing.

Cheryl walked behind Lily and said, “An animal screams every time you guys walk in here.”

“I understand if you want to leave,” Lily told them. “No charge for the coffee.”

“Are you kidding?” Bjorn said. “This is like performance art. There should be a cover charge. Plus there are cute waitresses.”

Lily looked around. “Who?”

Fin sighed. “He’s trying to pick you up. He’s doing it badly, but he’s trying.”

“Oh. I’ll get your order,” Lily said, and Fin nodded and went back to doodling.

Later, when they were gone, Lily looked to see if he’d left the dragon menu. He had, but now beside the dragon, there was a tiny waitress with a sign that said, “No Vikings.” He’d done her hair in red marker.

“Funny,” she said, but she kept the menu because the dragon was beautiful. 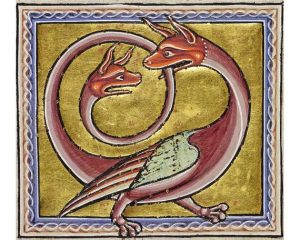 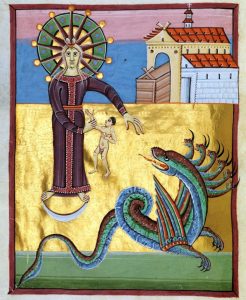