Here’s a blast from an Argh author’s past:

King Me was Deb’s second book, self-published “on a whim;” her third book was the one that got her an agent. Four books later, she sold to a New York publisher and never looked back. Until now.

Morgan’s a modern witch who bows to no man. Arthur’s a mystic king who doesn’t trust women or magic. But they’ll have to work together to find a missing wizard before an evil sorceress captures him and ends the world . . . 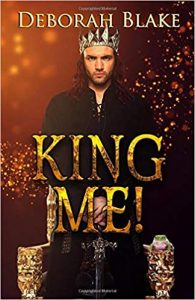 Morgan Fairfax and her coven perform a ritual to bring forth a hero to save the earth from war and global warming. Morgan is hoping for a brilliant scientist, or maybe another Gandhi. Instead, she gets Arthur Pendragon, King of Britain, who is not impressed with her, especially when he finds out she’s misplaced Merlin, his right hand wizard. Add in political mayhem, Morgana Le Fey and her weasel of a son, a bunch of wacky coven members, a famous actress and Morgan’s psychic Scottish grandmother, and you have a paranormal romantic comedy that will have you saying “King Me!”

As Deb says, “It’s a humorous paranormal romance, and I figure we can all use more humor now. It’s also free for anyone who has Kindle Unlimited.”