The cost of his redemption is trust. Her trust…

When Nate promises to protect his best friend’s little sister from her traitorous uncle, he knows it’s the least he can do to atone for his past sins. And if a marriage of convenience is the most efficient way to guarantee her safety? So be it. He’s ready for anything…except how quickly his lovely new bride would steal his heart… 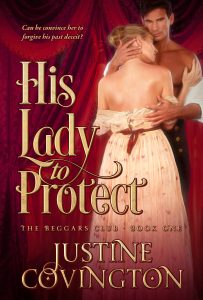 Susannah never intended to marry the man who led her brother to his death. The fact that she once loved him? Irrelevant. She just can’t allow herself to trust him again. But it’s not long before she starts to wonder if there’s more to Nate than meets the eye. What if he’s not the villain she assumed he was? And if that’s the case…can her poor, beleaguered heart survive another inevitable fall?

Nate and Susannah have much to overcome if they have any hope of finding their way to happily ever after. But what if trust is simply a luxury neither can afford?

Buy His Lady to Protect to read the first in an exciting new series centered around six friends from Eton and set in the infamous Regency period.

5 thoughts on “Argh Author: Justine Covington’s His Lady to Protect”