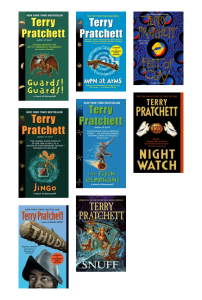 I’ve been thinking about series. I recently read six books in a series, but I read the last five because it was a series, not because the first book was fantastic. They were fine books, but they’re not anything I’ll read again, and the first one wasn’t great enough to make me seek out the author–perfectly good but not great. So it had to be that I just wanted to see that community again.

Is that why most people read series?

Of course, there are series where the individual books are so good, you’d read them anyway (like Discworld, for example) but even then, there are duds (nobody’s excellent all the time) and I read them, too. Of course, I’d read Vimes doing almost anything (including reading a book to his kid), so it’s also character, but I really think it’s the community that brings me back.

As to why people write them, I can see the lure for writers–one set of world building, reusable–but I can also see the pitfall. If a great story is about the most important event in the protagonist’s life, then the sequel is about the second most important event, and the third book is . . . . Declining stakes, is what I’m saying. People have asked for sequels, but my stuff really isn’t set up for sequels, so I’m pretty sure anything from the past would land with a resounding thud. But in the future, there’s the Paradise Park/Monday Street books, and I have this three novella idea that starts with “Hot Toy,” and the Liz Danger books were always planned to be a four-book series, so it’s not that I’m averse to the idea. It’s just keeping reader interest. And my interest. (Very short attention span here.)

So what I’m trying to figure out is, (1) why do people keep reading sequels, and (b) is that something I want to mess with in 2020? Not for any of my previous books, although come to think of it, the Alice and Nadine books are kind of sequels (but not really). I really want to write outside the box in 2020, since I have no knowledge of the current box (dating in 2020) and I’m a lot more interested in the stuff around the romance in these books–magic (the prestidigitation kind), butterflies, art crime, writing romance novels (that’s Liz), painting, magic (witches), ghosts . . . my research shelves are full of amazing books.

As you can tell, this post is not organized or well thought out, it’s just me wondering about series in general and as an option for me in particular (I have a VERY short attention span). The odd things is that I’m thinking in series now, like I have ideas for a second Nita book. Change is good.

What do you think? About series, I mean. Well, about anything. It’s that kind of day. I’m making shrimp and penne for lunch. How’s by you?

76 thoughts on “So, What Do You Think About Series Books?”