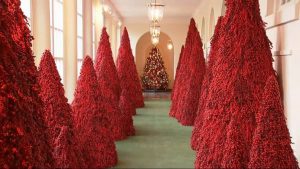 Welcome to December! If you’re in the US, that means hearing “Santa Baby” and “All I Want For Christmas Is You” at the supermarket while you’re trying to buy bok choy and considering the merits of Oreos vs Grasshoppers (buy both). It also means hearing the Christmas Nuts screaming about the audacity of Other Holidays being celebrated in preference to Our Lord’s Birthday Party (aka The War on Christmas) because America is now the land of the free-ish and home of the paranoid. Ah, for Christmas past, when my all my relatives would get drunk and take my allowance off me at poker (on the up side, I was damn good at poker by the time I was twelve). Or last year, when Melania Trump did the weirdest decorated White House in history (remember that creepy red forest? Evocative of both The Handmaid’s Tale and menstruation). Sigh.

OTOH, I just bought myself a fuck-ton of yarn for Christmas, and that makes me deliriously happy.

What made you happy this week? (Besides the Drifters, I mean.)

63 thoughts on “It’s December. Try To Be Happy Anyway.”