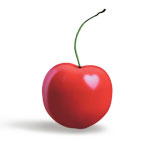 Today is Oh Thank God I Have The Internet Back Day.
It’s also Pear Month, but I hate pears, so you all will have to take that one.