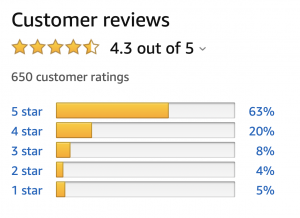 Every day I get an e-mail from BookBub, and every day I read through the blurbs and reject most of them (no, I do not want to read about a billionaire although if one would be interested in paying for a bedroom ceiling for an elderly woman with a great personality, he should call me), but there are always one or two I go to Amazon to learn more about. I read the blurbs, I check to see what PW and the NYT and Booklist have said about them, and then . . .

I read the one-star reviews.

The thing about the one star reviews is that they give me details no other review does. I read one and see “Is this bad language necessary?” and I think yes, the author isn’t pulling her punches. I read more than one “The hero was abusive and the heroine liked it” and I stop reading. I read, “This was just another dumb romance,” and click to read the sample, which is the make it or break it moment for me (usually break it because I’m ridiculously picky).

I don’t leave one star reviews. If I don’t like the book, I don’t like the book, doesn’t mean somebody else won’t. I’d leave a one-star for a racist book or something that trashed women in general or anything that said, “Trump is great,” but since publishers tend not to put out things that are going to get them toasted, I don’t trip across many of those. My one star reviews would be some variation of “This is not my cup of tea” which is not the same as “This is a bad book,” so I don’t post that.

And yet I am drawn irresistibly to the one star reviews on books I’m looking at just for the insights into readers. Maybe that’s part of it: I’m reviewing the reviewers. The one star reviews for Maybe This Time were fun: people actually accused me of being a literary writer:

“Lame!! I wanted to read a funny and charming Jennifer Crusie book but instead I got this piece of literary garbage. I stopped caring about five pages in.”

“Have an unpleasant hunch she decided she was going to write a “real” hardcover piece of fiction and got bogged down.”

“What has happened to Jennifer Crusie???”

. . . but mostly they were variations on “This is not what I expected” and a good indication of why SMP doesn’t want my demon book. That doesn’t mean I won’t finally finish the demon book, it just means that I’m not meeting some reader expectations (7% of MTT readers) and I either go back to writing contemporary non-supernatural romance comedy (SMP’s preference) or I keep writing what I want and accept that I won’t sell as many books. I’d discuss that further, but everybody here knows what I’m going to do, and I really want to talk about reviews.

So I get why the seven percent were outraged at Maybe This Time, but look at some of the thirty-six one star reviews for Bet Me, the most romance-y book I’ve ever written (don’t rush to tell me the reviews below are wrong, these are their opinions and they’re entitled to them; also I have an ego of cast iron, so I’m good here):

“Page after page of body shame. It was depressing, offensive, and hard to stomach.”

“Also, doughnuts during sex because she’s fat? That’s insulting. That’s how you get ants.”

” The main character’s loathing for men was tiresome and I found the whole plot exhausting and annoying.”

” It’s a long awkward attempt at body positivity that just ended up making me embarrassed for being a fat girl. For being a book with a main character that likes to eat the only food it mentions is the same damn Italian dish over and over and over. And hot dogs. And donuts. Barf.”

“This book is awful! I bought it based on all the very positive reviews but it is over long and just silly. I am beginning to think that I should write a book!”

“I was enjoying the book until Jennfer Crusie started using my Lords name is Vain!!!! Why? What was the point? You spoke blasphemy about God !!!!!! Not just once but over & over again!!! I couldn’t take it any more!!!! Shame on you!!! I’ll never read another one of your books!!!!!!”

“Pretty amateur attempt at a rom-rom story. Characters were predictable and somewhat annoying. A lot of the dialog was pointless and did nothing to further the story. Lots of clear attempts to be “funny” but most fell flat. First book by this author and I guess I’m not a fan.”

Some of those are clearly Not My Readers and that’s fine. The ones that are interesting are the ones that saw Min as body-shamed and a man-hater. As I remember (it’s been awhile since I wrote the book), the only person who body-shamed Min was her mother, clearly not somebody the book thought was a good person, and I have no recollection of Min hating men in general. I think that’s a function of hitting a sore spot in a reader, which you cannot avoid–even if I could write a book that wouldn’t upset anybody, it would be about three pages long and people would complain because it was boring–but I do think it’s a good idea to consider if the things you’re saying are (a) controversial or hurtful and then (b) necessary to the book. A lot of people are going to be unhappy about Nita’s pro-immigration stance, but it’s necessary to the book. There are times, however, when my need for snappy patter overcomes my common sense.

I got one reader letter on Bet Me right after it came out, a very polite letter, talking about how one throwaway line in the book had hurt her, the one about how every woman in the room with a working ovary looked at Cal and wanted him, or something dumb like that. The reader who wrote couldn’t get pregnant, and she’d picked up my book as a solace, and I’d kicked her in the teeth. She was very nice about it, she didn’t say I shouldn’t have written the line, but her pain was clear, and it happened because of a stupid throwaway line that the book didn’t need. I never thought about it even though one of my best friends has mourned her infertility her entire life. I should have known. If I could take that line out, I would.

And yes, I know some reviews have ulterior motives, but that’s the reviewer’s problem. I gave a speech to RWA once, two thousand people in a ballroom, in which I said that I hated three star reviews because they basically looked at my book and said, “Meh.” I said, “Get back in here and give me my one star, damn it.” Less than twenty-four hours later somebody posted a three-star review that said, “Jenny says she hates three star reviews, but . . .” That person has issues that are not about my book. Those reviews I skip.

But 99% of them are valuable as insights into readers (my books) and the books I’m thinking about reading (other people’s books). So here’s a question: how do you read reviews? How do you sort out which are helpful and which are somebody bleeding their personal issues onto the book? What are the dealbreaker review points* for you, the things that will make you say “Nope” and not even look at the sample? (Always read the sample)

How do you read reviews?

*I just realized I don’t have any deal breaker review points. But give me a BookBub blurb that says “billionaire” or “mate” and I’m gone.

66 thoughts on “How Do You Read Reviews?”