So I’ve been having a spot of depression here. I very rarely get depressed because, let’s face it, I’m not deep, and I’m easily distracted, but for the past couple of days, I have not been my cheery, obnoxious self. Even my therapist got exasperated with me. “You intellectualize everything,” she said. What did she expect me to do, talk about my emotions? Jeez. Then Krissie wrote me and said she was depressed, and I pointed out that our deal was that only one of us could down at a time, and then I wrote her what I thought was a cheering post except in retrospect I probably shouldn’t have quoted Tennyson and Coleridge. Not exactly cheery guys, those two. But it did make me think about emotions (blech) and what makes me not depressed (yarn! food! great t-shirts! dogs!) and then I read the Washington Post this morning and realized there was another thing that cheered me up.

Then I read Jennifer Rubin’s column in the Post. Rubin and I do not share many political views, but we are both anti-Trump, so her column today made me laugh out loud. It’s just brilliant, a careful, calm, well-thought-out explanation of why it would be so much better for the President if he resigned for health reasons based on his recent trip to the hospital. Resignation would stop the impeachment hearings cold, VP Pence would inherit the diplomatic nightmares Trump has created and the possible recession his trade wars have caused, and he could retire not in disgrace. Not once does Rubin crack a smile, but the column is so well reasoned, so obviously designed for a readership of one, so competent, that I laughed for the first time in days.

Then I saw the Ann Telnaes cartoon below and laughed again. Telnaes may be my favorite political cartoonist ever, and that’s saying something because I love cartoonists. I love this one in particular for the meticulous use of line and color, for the brilliant use of white space, for the gorgeous caricatures, for the sense of humor, but most of all for the confidence and competence that meant that she didn’t stoop to putting a line of explanatory text under the cartoon. It’s flattering to have an artist (or a writer) show something without telling you what it means because, hey, you’re smart enough to get it on your own. I needed a little flattering and I definitely needed a laugh and this gave it to me: 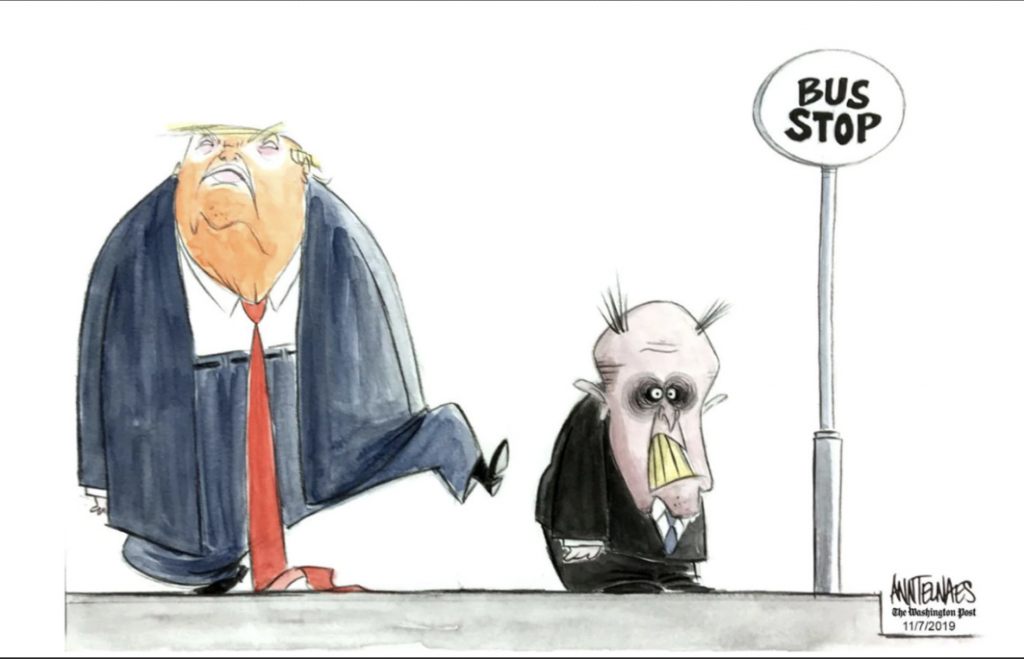 So I’m doing a lot better because after what seems like years (oh, wait, it has been three years) of watching the clowns to the left of me and the jokers to the right make the world a worse place, today I woke up to competence. And laughter. And my neighbor Kathleen leaned out her window and yelled that she liked my pink pajamas when I took the dogs out (I live on a one-lane road that’s behind Kathleen’s house, I wasn’t flaunting my jammies to anybody who didn’t know me) and that made me laugh. And then Milton tore into an entirely empty side yard and went nuts barking because evidently something had been in there since the last time he’d been in there (the day before) and that was NOT ACCEPTABLE, and I laughed again. Then Krissie wrote and she’s feeling better, and Mollie wrote and made me feel better, and I remembered I had a kitchen full of food and a house full of yarn and books and dogs and a life full of great people, and I made lunch.

Nothing but competence and good times ahead.

Here, have some more Telnaes. 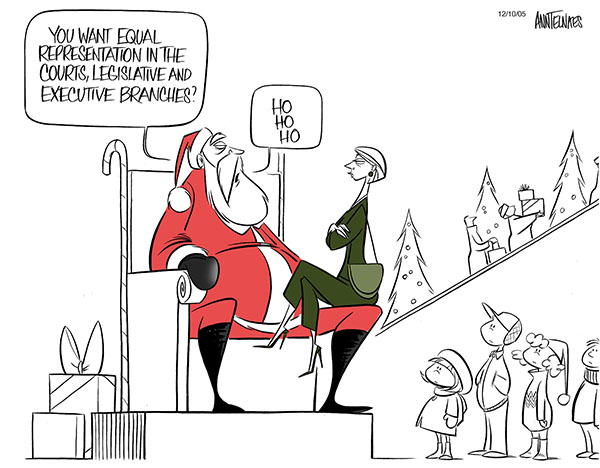 (Look at that line and color and the gorgeous use of white space. Sigh.)

25 thoughts on “Competence as Valium”