Today is Fibonacci Day, which celebrates the Fibonacci sequence (which I know about because some crochet patterns are based on that numerical sequence) ever since Lenny Fibonacci figured it out in 1202. (Okay, it’s Leonard of Pisa, but that seems so formal.) (Also, he wasn’t the first to figure it out, India had been there first and called them Virahanka numbers, and even before that people had been muttering about it as far back as 200 BC, but Fibonacci was the first one to notify Europe, aka the white guys, so much like Columbus discovering America which had already been pretty much discovered by numerous natives already there, the guy with the connections in Europe gets the credit.). (Where was I?)

Right, Fibonacci numbers. They form a sequence in which each number is the sum of the two previous ones. As:

Why is that important? Because it’s freaking everywhere in nature, one of the basic patterns of the universe, occurring way too often to be coincidence. There’s a plan here, people. It’s in the way a pine cone is arranged, in the way rabbits mate, in poetry, in computer algorithms, in tree branch patterns, and oh yeah, if you diagram it out, it forms the golden ratio: 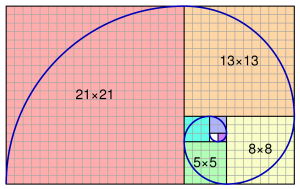