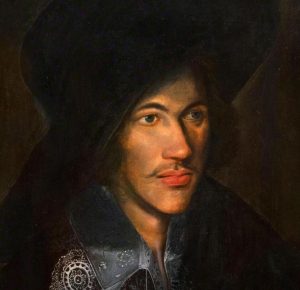 The thing about writing love stories when you’re a naturally cynical person with disastrous relationships in her past is that achieving the willing suspension of disbelief necessary to convince the reader that they all lived happily ever after is really difficult. I have found, in trying to do this, that the most useful thing to remember is that we’re writing to promise mature love. Immature love/infatuation is easy to write, but everybody knows that doesn’t last. Mature love, the connection beyond conditions, is hard to write, but if we can get that promise on the page, it’s what powers the romance.

So when I turned back to Nita and thought, Okay, it’s a romance, but they’re only going to know each other five days, how the hell am I going to foreshadow mature love in that time?” And then I was reading the Gil Cunningham mysteries which made me think of Renaissance poetry (those mysteries are pre-Renn, but still, ye olde times), and I remembered my favorite love poem of all time, John Donne’s “A Valediction Forbidding Mourning.”

Donne was the son of an ironmonger who was sent to school above his station and evidently had a remarkably good time, since he is almost universally referred to as “the rake, John Donne” during that part of his bio. In 1599 when he was twenty-seven (old enough to know better, young enough not to care), he fell madly in love with the 15-year-old niece of his patron, and in 1601, they eloped. All hell broke loose, and Donne ended up in prison for awhile, and the impact on his career was ruinous: he and Ann lived on the charity of benefactors while he did whatever job was offered to him, while Ann gave birth twelve times in sixteen years. But earlier, in 1611, ten years after his marriage, he received a commission to travel to Europe on business. It was a good news/bad news situation. The good news is that you’ve been given a position that might lead to great things. The bad news is that you’re going on a dangerous voyage that you may never return from and your wife is “heavily pregnant” and freaking out. So he wrote “A Valediction Forbidding Mourning” to her,which is pretty much “There’s no crying in this relationship even though I’m going a dangerous journey and you’re eight months pregnant with our seventh kid.”

“Valedition” is full of conceits, clever extended metaphors that verge on showing off until you begin to unpack them and realize how brilliantly they capture the couple’s very real love. “Valedicton” joins Shakespeare’s “Love is not love which alters when it alteration finds” (Sonnet 116) and Elizabeth Browning’s “If thou must love me” (Sonnet 14) as a protest against infatuation and a celebration of mature love. All of these very brilliant people knew the truth about real love: it has no conditions.

And now a short non-poetical digression. Many researchers on romantic love have concluded that falling in love happens in stages, the two big ones being Immature and Mature Love, also knows as Conditional Love and Unconditional Love, also known as Infatuation/Limearnce and The Real Thing. That means that the big question that comes to mind every time you fall for somebody–“Is this just infatuation or is this forever?”–is finally answered: It’s infatuation. Infatuation is the gateway to The Real Thing, it’s just that sometimes people don’t make it to the gate.

If you make it through infatuation, you can find yourself in mature love, the kind that lasts. What’s the difference? Well, mature love is calmer, for one thing. Infatuation is like being on speed: your heart hammers, you can’t think, you’re breathless all the time, and you have a strong suspicion that this is not good for you but you lean into the rush anyway. Mature love is calm; when you see your lover your heart does not race, you just feel good, everything is better when that person is close. This is because immature love releases one kind of chemical in your brain and mature love releases another (endorphins!) but for the purposes of writing romance, writing infatuation is “My god, this is exciting” and writing mature love is “Yes, this is where I belong.”

For writers, the bad news is that it takes six months to three years to pass through the immature stage and into mature love, and most of our stories don’t cover that much time. (Another problem: infatuation is exciting and mature love is calm, and nobody wants a calm climax to her story.) Nita and Nick know each other five days, so they’re still early in the infatuation page. How do I convince cynics like me that they’re going to be The Real Thing? Foreshadowing, grasshoppers. And what are we foreshadowing? Unconditional love.

Yeah, now get that on the page.

Let’s go back to Donne’s “A Valediction Forbidding Mourning.” He rejects conditional love directly in the 13th to 20th lines:

Dull sublunary lovers’ love
—Whose soul is sense—cannot admit
Of absence, ’cause it doth remove
The thing which elemented it.
But we by a love so much refined,
That ourselves know not what it is,
Inter-assurèd of the mind,
Care less, eyes, lips and hands to miss.

In other words, lesser lovers will fall out of love if they can’t have the conditions of that love, seeing each other, holding each other, kissing (there’s your romance novel), but their love is beyond that, beyond conditions. In fact . . .

Our two souls therefore, which are one,
Though I must go, endure not yet
A breach, but an expansion,
Like gold to aery thinness beat.

I love this conceit, that their love won’t break because of their separation but will grow larger, spreading like beaten gold leaf, even to “airy thinness,” making it part of the air they breathe.

If they be two, they are two so
As stiff twin compasses are two;
Thy soul, the fix’d foot, makes no show
To move, but doth, if th’ other do.
And though it in the centre sit,
Yet, when the other far doth roam,
It leans, and hearkens after it,
And grows erect, as that comes home.
Such wilt thou be to me, who must,
Like th’ other foot, obliquely run;
Thy firmness makes my circle just
And makes me end where I begun.

This is the part that takes my breath away. First of all he’s comparing their love to a compass which is a helluva conceit. Comparing it to gold–precious and rare–even comparing it to gold leaf, is pretty standard poetic metaphor. But a compass? Well, yes, she’s the firmness at the center of their lives, and he revolves around her because their souls are forever joined, and he will forever come home to her because “thy firmness makes my circle just.” That’s mature love. He’s not coming home to her because she’s cute or good in bed or keeps giving birth to his kids, he’s coming home because he’s joined to her forever, making his life a circle around her.

That’s what I want to get on the page in my romances, that sense of inevitability. Those blurbs “Can he save her?” (duh) always annoy me, but the ones that REALLY make me nuts are the ones that ask “Can they make this work?” First of all, it’s a romance novel. That’s like asking of a murder mystery if the detective will solve the puzzle: of course he or she will solve the puzzle, it’s a freaking murder mystery. So of course, they’ll make it work and end up together, if they don’t, it’s not a romance novel. The story is about how they get there (and it’s not through a Big Misunderstanding, don’t make me come over there and slap you). I’ve got to get that “of course” on the page.

So how? First of, violating the conditions. She’s not beautiful, the sex isn’t always great, they each do something the other person strongly objects to, they fight and it’s not cute banter, they both have doubts and talk through them, but when the chips are down, they stick, no matter what, even (maybe especially) if it means sacrificing something important. And by Act Four, they both know that their love can be beaten to airy thinness and will not break, it’ll become the air they breathe, always bringing them back to each other. It doesn’t matter what they do or say, what happens around them, they’re forever together in that golden light.

So that’s what I’m doing now with Nita. Writing romance is not easy, Argh People. “A Valediction Forbidding Mourning” is a good road map for how to do it.

Note: How good is this gold/compass conceit? The symbol for gold is a circle with a dot in the middle. There’s a reason Donne is considered the best of the metaphysical poets. See also “No man is an island,” “Death be not proud,” and “Go and catch a falling star.”

60 thoughts on “Writing the Real Thing”