I remember being in a car back in college with a driver at the wheel who was stoned. It was terrifying. That’s what being an American feels like right now for me. Apologies to the governments of Ukraine, Australia, and Finland. Syria, apologies aren’t enough. We’re better than this. Also, shout out to England which has it’s own terrifying leadership. At least Johnson isn’t trying to corrupt the whole damn world while selling out to dictators. Rather than bury my head in the sand (or in my book which must be finished) I’ve been cleaning and cooking and reading and writing and whistling in the dark (mostly Elton John’s “Nikita,” that sucker is a real ear wig). Also got my stitches out, took down the curtains in the two bedrooms to have them dry-cleaned, and bought Veronica some more t-shirts. Anything but look at the damn news.


I’m starting to think that bok choy is one of the building blocks of the universe. I’m putting it everything lately, the crunchy whites go into the pan first and then the leafy greens at the end. I do not like dark leafy greens although I will sigh and add spinach at the end of pasta because it’s Good For Me, but I love dark bok choy leaves. Turns out that what I’ve been eating is Shanghai bok choy, which is fine by me: “Raw Chinese cabbage is 95% water, 2% carbohydrates, 1% protein and less than 1% fat (table). In a 100 gram amount, raw Chinese cabbage supplies 13 calories and is a rich source (20% or more of the Daily Value, DV) of vitamin A (30% DV), vitamin C (54% DV) and vitamin K (44% DV), while providing folate, vitamin B6 and calcium in moderate amounts (10–17% DV)” [Wikipedia]. Plus the stuff is just gorgeous to look at.

The Washington Post had an article on Steve Miller (the musician, not that vile bigot who works in the White House), who is evidently difficult to work with, a perfectionist who’s kind of a jerk. I can sympathize; I told Krissie that I knew I had a reputation as a real bitch in the industry and she said, “Well, you have a reputation for being outspoken.” Which is not the same thing as being a truth-teller, by the way. It just means I’m tactless. I should work on that. So I was feeling some sympathy for Steve Miller already and then I read this about his approach to writing: “I had choices to make,” says Miller. “You have to be really disciplined, but at the same time you want to get this great, spontaneous feeling on the record and you know you’ve got three seconds to capture people’s attention at the very entrance of a song.” That’s writing a novel, right there. Music, painting, fiction, it’s all the same at the bottom: reach people with clearly defined work that’s spontaneous and disciplined. And if you’re writing romance, you do it backwards in high heels.

I want to start painting again. I say that every year and never do, but I might actually do it this time. I’m fairly sure that all my paint tubes dried up years ago, but the brushes are still good. I’m not looking forward to stretching canvas again, but I can gesso hardboard with the best of them. Or maybe I’ll just finally paint that rug on the floor I’ve been thinking about for years. I was going to do something geometric with flowers and then realized I could put the dogs in there, too, and then maybe the grandkids, and then maybe Krissie as a flying nun. It’s my floor, I can do whatever I want with it. Cogitating now.

In the meantime, there’s collage. I keep finding stuff for the Paradise Park collage even though Alice is in my head. I have the starts of the Haunting Alice and Stealing Nadine collages somewhere, probably in the garage, so I should dig those out, too. The air is brisk these days, but still not nippy, so today is a good day to crawl into the garage (there’s a lot of stuff in there to crawl over) and get my magic books and ghost books that I bought years ago for Alice and the collages. 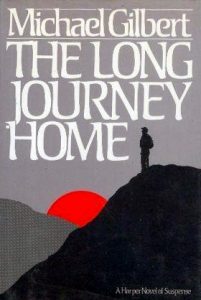 If I can find my copy of Michael Gilbert’s The Long Journey Home that would be good, too, since it’s not on Kindle and I really would like to reread it. I’m not sure why I love that book so much, it’s not my kind of thing at all (bad things happen to good people and then worse things happen to the bad people who did the bad things), but I think it might be because it addresses a pretty common fantasy: What if you could just walk away from your life? The protagonist is a wealthy Englishman who gets on a plane in Italy, decides to get off without telling anybody, and then finds out later that the plane went down and he is missing presumed dead. He can call his business and tell them he’s alive (he has no family), or he can just start walking. It’s an exhilarating story, full of competence porn, and then people he likes are murdered, and he turns to vengeance competence porn, which is also satisfying, especially right now when the bad guys appear to be getting away with treason (grrrrrrr). Gilbert is like Dick Francis that way: his Bad People are really bad, but then they come to really bad ends. Catharsis. (I don’t know where the British got their rep for being phlegmatic; Gilbert and Francis both have vicious streaks when it comes to putting down evil.) I could buy the paperback new for $860.48 plus $3.99 shipping, but I think I’ll just look in the garage. (Seriously, who buys a paperback for $860?)

Speaking of outrage, my BookBub list had TWO slept-with-her-professor-isn’t-it-romantic romances in it. Sweet Jesus, people, NO, that’s not romantic, it’s an abuse of power and it almost always ends in disaster for the student, if not the professor, too. Don’t sleep with your professor. Don’t sleep with your boss. It’s ICKY. Bleah. Must think better thoughts. Quick change the subject. Or get brain bleach. BLEAH.

Okay, new thought. You know what I like about October? Pajamas. Good, soft, cosy knit pjs. I have Nita’s poodle pjs, but they’re flannel which is good, but not as good as medium-thick knit. Also long knit nightgowns. There are times in the winter when long knit nightgowns and knee socks are pretty much what I wear 24/7. Which reminds me, Walmart (it’s where I get my prescriptions filled) had Nightmare Before Christmas knit sleep shirts that went down to the knees, which was great, BUT they also came with over-the-knees stripped sock which was FABULOUS. I’m probably spending the winter in them, flashing my socks whenever I take the trash out.

Fortunately, my neighbors are open-minded. It helps that my house is not in their eyeline (lots of trees and forsythia) except for Kathleen, the back of whose house faces mine and who spends a lot of time in her kitchen which has windows that overlook mine so she can make fun of me when I try to back into my driveway. She opened her window once when I’d backed over my peonies again and said, “Jen, when you moved in seven years ago, I told you not to worry, you’d get the hang of backing in there. I was wrong. You’re never gonna get it.” This is true, but it’s not something that keeps me up nights. The peonies were done anyway. Of course Kathleen is also the person who opened her window and yelled, “Jen, are you all right?” when I tripped and fell at the end of the driveway trying to fix my shoe while walking (I’m a multi-tasker). I wasn’t even on the first bounce before she was offering aid. And when Veronica sashayed out in her new T-shirt for the first time, Kathleen opened the window and said, “Oh, I LOVE Veronica’s shirt.” And when the rescue squad showed up last December at 6AM because I had vertigo and couldn’t figure out what the hell was going on, Kathleen was out there like a shot, taking care of me and answering questions because the vertigo was so bad it was hard to talk. What I’m saying is, Kathleen is the best. Our politics are completely opposite, as is our approach to religion, and it doesn’t matter. We’re friends. Kathleen restores my faith in human nature daily. Which is good because it needs to be restored daily these days.

So I went out to the garage and dug out my Alice research and what was left of the Alice collage which turned out to be mostly a ripped up and bent background. It also turns out that when you think about a book for six years, you accumulate a LOT of research. I can put the collage back together and start collecting images since I have a really good grip on it now, but the research . . . I’m gonna be doing a lot of reading.

Now I’m thinking I might go to Walmart and get more of those sleep-shirts-with-socks. You know those suckers are going to sell out. That would mean changing out of my blue-striped Ellen Degeneres pjs (woven, not as good as knit but lovely and cool for summer) and getting in the car and driving into town, but I could also drop off the curtains at the dry cleaners and possibly pick up some crab rangoon while I’m at it (there’s a lot of crab rangoon in Nita). Although I have much cooking to do today: the fridge is full of bok choy and steak and I’m thinking stir-fry and steak sandwiches (I bought ciabatta rolls and tomatoes and mozzarella) and also I’m thinking my bedroom is sunny and warm the dogs are all snoozing and maybe I’ll just stay home in pjs all day and write. And read. And eat.

And not look at the news.