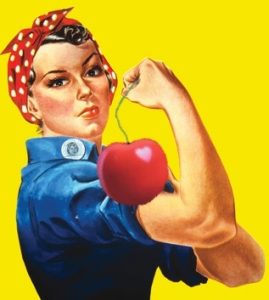 Welp, it’s October. 2019 has escalated quickly. October is probably my second favorite month because of Indian summer and Halloween. You can keep your day-after-Christmas sales; I love the day-after-Halloween sales: cheap skulls and lots of candy. This week I worked on Nita, wrote a proposal for Alice, made an appointment to get my stitches out (after contemplating doing it myself and decided that would be bad although it would have made for an awesome Working Wednesday brag), and made a really great pork chop with cartelized onion and noodles dish. The vet suggested Veronica should be wearing a tight T-shirt so we scored one for three bucks on markdown at Petsmart, and I thought about crocheting for her; then I realized she’d just garbage it up and bought more cheapos on Amazon. If I get my act together, I’ll do a Moment of Dog post so you can see Veronica in her new pink shirt. It says “Miss Understood” on the back. Hey, it was three bucks. There was a hoodie that said “K Bye”, but it was nineteen bucks and I’d already dropped over $800 on her at the vet’s so we went with Miss Understood.