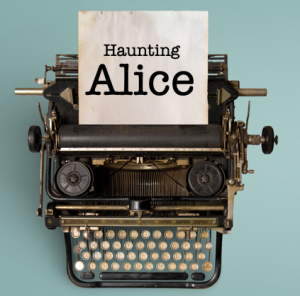 Because I must get a proposal done before Nita is finished, I have started on a new book. Yeah, I’m not thrilled about that either; I love the book but balancing two narratives in my head is not a good idea, especially since one is overworked and the other is nascent, but here we are. At least it’ll make a nice change for you all since I’ll be bitching about Alice (aka Haunting Alice) instead of Nita (aka The Devil in Nita Dodd).

So what’s a proposal you ask, and how am I making one for Alice? (You have to ask because I need a blog post.).

A proposal is a quick-and-dirty way of showing an agent or an editor the book you want to write. The agent or editor needs to know three things:

• Can you write, especially can you put character on the page?
• Can you plot?
• Is this book of any interest to her? In particular, can she sell this sucker?

I could go into all of that in much more depth, but I’m not going to because what I’m interested in here is taking the raw materials of my very early discovery drafts for Alice and whipping them into a proposal, or at least the first-thirty-pages-and-a-synopsis part. This is a real bitch for me because in general I like to have at least half or more of a discovery draft done before I start trying to nail down a plot. For reasons I will not go into here, I don’t have that luxury this time, this needs to get to New York. So…

Will the protagonist defeat the antagonist and get the goal?

Who’s the protagonist? Alice Archer
Who’s the antagonist? Uh, not sure. Could be the love interest, Ethan. Could be the devious parapsychologist, Ulrich. Could be Alice’s murderous Aunt May. Let me get back to you.
What’s the conflict? Alice is trying to close down Archer House because it’s dangerous. The parapsychologist and May both have good reasons to oppose that. How they’ll do it is another question, but I can hit that later. Alice is also trying to keep her insane life under control, one of the many reasons she became a scientist (lepidopterist), and Ethan the magician/illusionist is not helping with that.

Okay, that’s not bad. If it turns out the story is a romance (probably) then the whole Archer House bit becomes a subplot that tests and advances the romance, and Ethan the Annoyingly Unscientific becomes the main antagonist, but the action kind of plot is much easier to plot than a romance, so I’m going with that for right now.

So based on that central conflict (I’d do a conflict box, but it’s pretty obvious), I can use the five turning points to make a plot.

1. Turn out of stability: Alice is leading a stable life. Boring, so what blows that up and catapults her into conflict, preferably on the first page? For the Archer House plot, it’s finding out that her brother wants to sell the house which Alice still considers dangerous. For the romance plot, it’s meeting Ethan. The first scene is meeting Ethan, the third scene is finding out about the sale. Yeah, this is a romance.

2 (End of Act One). Situation gets worse: The guy who wants to buy the house is already renting it and is holding seance weekends there. Relationship grows closer: Alice and Ethan are appalled (Alice) and fascinated (Ethan) by the whole ghost weekend thing, and keep meeting for coffee to collaborate to figure it out. When Ethan tells her that the parapsychologist is having a big blowout at the house on Halloween, they both head south again to stop him.

3 (End of Act Two): Point of No Return: Alice accidentally sleeps with Ethan (not part of her plan) and then realizes her Aunt May (deceased) is still in the house and she’s not alone; somebody dies.

4 (End of Act Three): Crisis: Alice and Ethan are trapped in the house by a storm with a bunch of loons who signed on for more than they can handle in the Halloween Ghost Weekend (I’ll think of something catchier) and some very aggressive ghosts.

5 (End of Act Four and the book): Alice and Ethan burn down Archer House and commit to each other standing in the smoking ruins. (I have no idea what happens at the end except the Good Guys win and live happily ever after; the Smoking Ruins ending is just a placeholder.)

So what do I find crunchy in that admittedly slapdash five point outline?

• Well, Alice and Ethan, scientist and illusionist.
• Love the idea of Dennis (you all remember Dennis?) meeting his arch enemy Ulrich (must find a great placeholder for Ulrich).
• Love the idea of science and magic colliding, reality and perception.
• It’ll be fun to do Ulrich’s clients, the people insane enough to spend $1000 to stay in a haunted house for a weekend. There should probably be about a dozen, but that’s way too many characters. Maybe a lot of them cancelled. Six loons would be good.
• Love the idea of everybody coming back to Archer House, the whole clown car thing from MTT again.
• The butterflies. Thinking about using the four stages–egg, caterpillar, pupa, butterfly–as act headings but not sure how it works. Could be a metaphor for Alice finally dealing with the trauma of her childhood, coming out of her shell, spreading her wings, but that might be too trite.

Now to make that into a synopsis.

You will notice that in between each of those five points is white space which in my method of plotting is an act. In that white space I will write a paragraph detailing the action that happens in that act. Please note that it is action, not thoughts, not themes, not back story, action. One paragraph in each white space, four paragraphs total.

So the first draft of the synopsis is:

This is much harder than it looks, so if you’re trying this at home, yes, I am tearing my hair out. Having a road map does not mean the trip will be easy, it just means I won’t lose my grip on my journey and end up in the literary equivalent of a ditch.

So then all I have to do is go through and smooth out the writing, adding more to the first act because I also have to set the scene and establish character in that first act paragraph which is now probably two, and probably doing one more five-point outline to sketch in the subplot which is Carter and Nadine. I definitely do not want any more than four pages. One would be better. (Update: Synopsis is finished and it’s two pages.) No I’m not going to put the synopsis up here, SPOILERS, and also the book’s going to change so much that there’s no point. The synopsis is to sell the book and you’re not my market. Yet.

Oh, and since I’m sending this to my agent and she’ll do the selling, I’m not doing a query letter.

So that’s all good, right? No. Before I send it off, I need to figure out what this book is about to make sure I know there’s a book there. So what is this book about?

Some of this stuff is already baked in because I’m using characters from earlier books–Alice and Carter (and others) from Maybe This Time and Nadine and Ethan (and others) from Faking It. Alice was always going to be a lepidopterist, so butterflies have to be part of the motif/metaphor structure of the book. I can’t remember if Ethan was always a magician, but he was always easy-going and curious and in love with Nadine, a plot point here. Carter was super-serious even as a twelve-year-old. Nadine was efficient and insane even as a sixteen-year-old. While this restricts what I can do in this story, it’s also helpful in that it gives me a huge head start on these characters and ideas. I loved these characters as kids so writing them grown up is going to be a lot of fun.

Plus I’m really interested in all of this, magic and perception and butterflies. So I’m gathering up research on ghosts and Halloween and insects and slight of hand and it’s all lovely and crunchy, and I love the characters as adults already–Ethan has a lot of Max in him without the whole conman thing and Alice is ruthlessly efficient which is so much fun–so I’m comfortable that even though this book is going to change radically from what I’m proposing (those of you who have spent the past four years watching me thrash through Nita know how radically my books change) the basic story is solid and, most important, I want to write it.

So I’ll send the proposal off to New York and then do the final polish on Nita to get ready for betas and probably send that off to Jodi, too. And then, god willing, I will only be writing one book, Haunting Alice, although there’s this other book, Stealing Nadine . . . .