Krissie and Toni and I talked about the future and the Monday Street books last weekend, and that sent me back to the VooDooPad wiki we’d set up for the entire world of that series.  I hadn’t been back there for three years, so a lot of it was out of date, including the diagrams.  And since in my story, Cat lives in the church, I went back in and redid the church diagram I’d done to show Toni the layout since her Keely was going to be moving through the different levels, too.   And just like that, I was back in the story and I remembered how important those visuals are to me.

Like everybody else, I keep single pictures on Pinterest to evoke ideas for my stories, but I think single pictures are like single words: they convey one image with multiple meanings.  I just posted this in the comments in answer to Kelly’s comment about one word titles:

“You need at least two words to tell a story because it’s not the words, it’s the relationship between words that gives meaning. So one word titles are pretty meaningless.   Think of a title like “Ecstasy.” Sounds like erotica but could be about anything. But “Ecstasy Lost,” “Chocolate Ecstasy,” “Ecstasy Vanderbilt,” “Deep-Space Ecstacy,” or “Ecstasy Lite” are all different genres: grief stories or cookbooks or comedy or sf or whatever (or possibly all erotica). It’s the space between the words where story happens.”

And I think it’s the same thing with pictures, I think the minute you put another picture next to the first, the number of meanings drops to about one percent of the original picture and the focus intensifies; the space between the pictures tells the story.  The logical outcome of this is collage, but sometimes, for a single idea that I’m trying to nail down in my brain, two or three pictures will do it because of the relationship that develops in the. space between.

Now that I think of it, it’s akin to negative space in drawing.  When I taught drawing to junior high students, I’d set up a still life and tell them to draw the shapes between the objects.  If they drew an apple, they’d draw their idea of an apple, not the apple that was there.  But if they had to draw the negative shape–the space between the apple and the pear next to it–that was something brand new that they had no previous idea of, and their drawing would be more accurate and more interesting.  The space between told the real shape of the object.

And the space between the words or pictures (or sometimes words and pictures) tells the story.

And here’s the diagram of Cat’s church that  I was working on when Krissie yelled at me to stop fruiting around with Monday Street and get back to Nita: 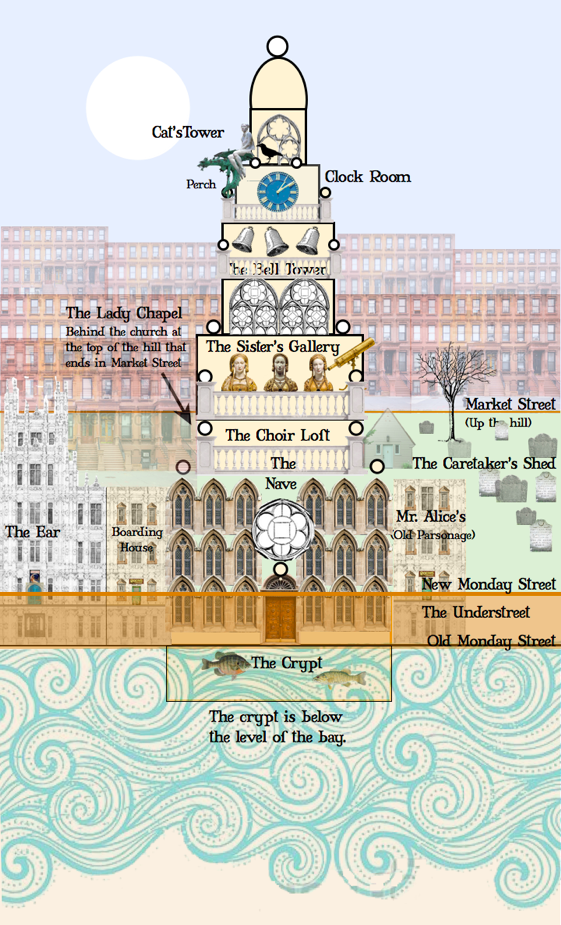 That’s more a map than capturing an idea, but it does  look like Cat to me.

And now I must get back to Nita.