This episode had to follow the cataclysmic events of last week, and it managed to do so in the least effective way possible. It’s as if the writers of this episode were more interested in moving plot than in character and consequence, and as a result, the entire forty-odd minutes fell oddly flat as the show moved people through their paces, checking off boxes without any real emotional arc or connection with the viewer. This would be a bad idea any time, but at this point in the series plot, it’s a terrible idea. HUGE things happened last week; if you’re going to drop that kind of weight on your viewer/reader, the impact has to have equal weight. Think of “The Devil’s Share” after Carter’s death: the grim weight of that story showed that Carter’s death mattered, would continue to matter. This episode shows that Root is now the Machine so she’s okay, and Elias never mattered at all. There are no consequences to last week, and that undercuts not only this week but last week, too. Root’s and Elias’s deaths should matter; attention should be paid. 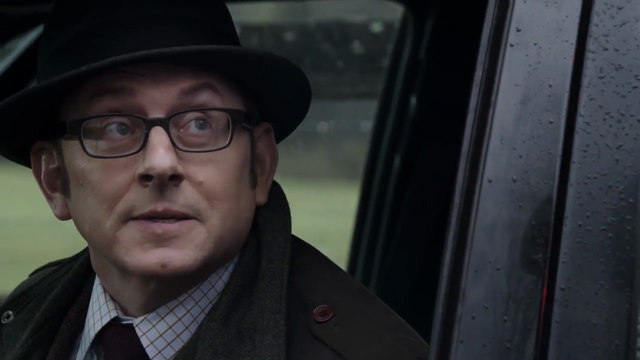 So Root is buried in a pauper’s grave, Fusco says, “Rest in peace, Cocoa Puffs,” and that’s it for mourning Root in this episode. Reese goes to make sure Shaw is all right, which of course she isn’t, but since Shaw is so emotionally damaged, we can’t get much catharsis from her, either. Harold has a few moments with the Machine, asking her not to use Root’s voice and then capitulating because he finds it comforting, and then he goes to work. Then Reese, Fusco, and Shaw find out the new number is the President of the United States and go to save him, but since he’s the POTUS, we’re not going to meet him or attach to him, so even the number of the week has no emotional weight. All of which means, there’s no hook for me in this story, I’m not worried about anybody because they seem as normally abnormal as ever, and so . . . I don’t care.

And I think that’s the big problem here: I should have cared. These people just lost two people who were close to them–one of them lost the love of her life–and the losses are shortchanged (Root) or ignored (Elias). We get a number of the week that we can’t meet because he’s the POTUS. We get Finch separated from the Gang and doing something with frightening consequences, but we don’t know what those are or who’s in danger, so there’s nothing here to grab onto.

Instead, there are things to establish, which is done in as clunky a way as possible.

* Finch goes Bad even though the Machine warns him that what he’s going to do will have collateral damage. But we knew Finch had turned last week because of that amazing monologue in the interrogation room. So this is Finch and the Machine talking just like Finch and Root used to talk, reiterating something we already knew. And without Root’s physical presence, the Machine is just Root Lite, in thrall to Finch because she’s just a Machine, where the real Root could and often did go off the rails.

• There’s a shadowy group dedicated to taking down Samaritan in the name of privacy, and it gets kneecapped right off the bat. Call it Vigilance Lite.

ª The big reveal at the end is that the Machine has a second Gang made up of previous numbers: There’s Logan Pierce, the billionaire computer genius (Finch Lite); Joey Durban, the former military guy (Reese Lite), and Harper Rose, the off-the-hook woman of many faces (Root Lite). It’s nice to know the Machine has more than one Gang, but their youthful enthusiasm and cheery outlook–the three of them smiled more in the last scene than Our Gang has smiled in five years–screamed, “This is a spin-off for the CW!”

Okay, I’ll admit, I’d watch a show about Logan Pierce because based on his original episode in Season Two (“One Percent”), he’ll do anything; he has a Young Nate Ford vibe about him without the alcoholic self-loathing, and he’d be a nice contrast to “I’m a very private person” Finch. But Joey was always just a good guy, and Harper was always more of a delinquent than a brilliant crook, so if this is the Gang 2.0, it has bugs.

Which means the end feels very tied-with-a-bow and pretty much weightless. Reese practically claps Joey on the back to say, “Good job, son” (so not like Reese), Shaw goes after Samaritan again (how exactly? no idea), and Finch does his new Finch-Bad-Ass by threatening the future of a guard’s young daughter (which I firmly believe is a complete bluff so Finch’s big turn to the dark side is lying to people holding guns on him).

And yet these are the people who gave us “The Devil’s Share” after Carter died so we could grieve her loss, so that her death would have weight. Why isn’t an enraged Shaw going after the shooter the way Reese went after Simmons? Why isn’t Reese hunting for Finch, worried that he’s going off the rails with loss, the way that Finch and the Gang went after Reese when he was crazed with grief? Why does the Machine give Logan the picture of Finch’s car instead of giving it to Reese? Why does this feel like an episode of NCIS?

And what the hell does the title mean in relation to the episode? “Synecdoche” means using a part to represent the whole: suits for business people, the Pentagon for the Department of Defense. The only thing I can think of is that the Gang represents many gangs working for the Machine, but that’s a pretty far reach. Like so much else in this episode, I just don’t get it. And because I don’t get it, it feels as though there are no consequences for the events of last week’s catastrophe.

Put another way, if actions in a story do not have consequences commensurate with the original impact of those actions on the reader/viewer, then the impact of the original actions is kneecapped. Last week was stunning. This week, it turns out nobody was stunned. Which means they’re going to have to ramp things up again next week, recovering from this week, to set up the final blow-out of the finale. It’s never good to have a blah episode, but the timing of this one makes it a really big mistake. 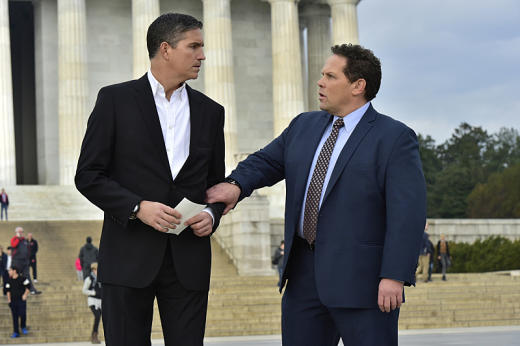 Weakest Parts
The lack of weight and consequences. This feels like a weak episode from Season One.

Smart Story Moves
Uh, bringing Logan back? He’s the only thing actually alive on the screen in this one.

Favorite Moments
I got nothin’.

Ominous Moment
There wasn’t a tense moment in this entire episode.

18 thoughts on “Person of Interest: “Synecdoche” and the Importance of Consequence”